Tigran Avinyan: Making a revolution in 2018, the Armenian society  decided that there will be no more "March 1"  in Armenia 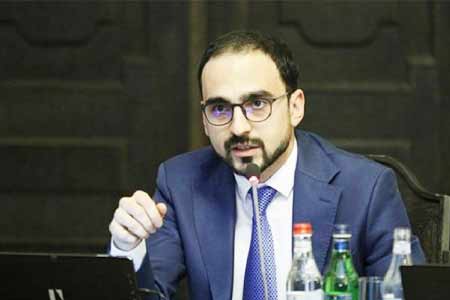 ArmInfo."13 years ago, our state and society were hit hard when a citizen protest challenging the official election results was faced with point-blank shots." With  these words, RA Deputy Prime Minister Tigran Avinyan addressed the  citizens of Armenia on the occasion of the anniversary of the March  2008 events.

"From that moment on, our reality passed into a stage of dull  tension, when, guided by narrow clan and personal interests, a group  of people decided that the power belongs to them," he noted in his  address. He noted that, thus, the state was alienated from the  people, and the citizen felt in his own skin that not only his  absolute and unshakable right to life was not protected, but was also  directly encroached by the state.  According to Avinyan, at the heart  of the 2018 revolution, when society refused to submit to the  dictatorship, was the intention to correct this injustice and return  power to the people.

Making a revolution, the Armenian society decided that there would no  longer be "March 1" in Armenia, and unarmed peaceful protesters would  not be shot. Power will not belong to a group of people, and will not  be transferred through behind-the-scenes agreements and determined by  secret and narrow clan interests, the deputy prime minister said.

He stressed that today, taking advantage of the emotional state of  society, attempts are being made to undermine democracy in Armenia,  bypass the constitutional and legal procedures of the people's  government, thus resolving political issues.

In this context, Avinyan stressed that such attempts by the  opposition are doomed to failure: "The government in Armenia will be  formed exclusively within the framework of the constitutional order,  through the free expression of the will of the society and free, fair  and transparent elections.  It should be noted that as a result of  clashes at opposition rallies following the 2008 presidential  elections in Armenia, in which Serzh Sargsyan won de jure, 10 people  died on March 1.

Recall that the current Prime Minister Nikol Pashinyan was then an  active supporter of Levon Ter- Petrosyan, who de jure lost the  elections, but claimed that the election results were falsified.  After the events of March 1, 2008, Pashinyan was sentenced to 7 years  on charges of organizing mass riots, but after serving 2 years, he  was released.