Varuzhan Avetisyan: The redeployment of the 102nd Russian military  base suddenly made it clear that "the Turks will not swallow us  anymore" 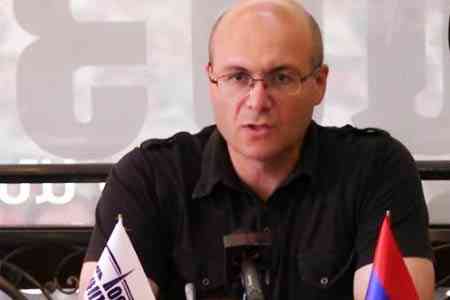 ArmInfo.  The recent verdict of  the court in the "Sasna Tsrer" case is evidence that the situation in  Armenia has not undergone any special changes since the reign of  Serzh Sargsyan. A similar opinion was expressed to ArmInfo by the  coordinator of the secretariat of the "Sasna Tsrer" All-Armenian  Party Varuzhan Avetisyan.

"In this light, the terms of imprisonment set by the court for our  friends did not come as a surprise to us.  Everything was decided  even during Serzh Sargsyan's ruling. And there simply could not be  changes in the attitude towards people who rebelled against the  colonial administration and its plans in the country, which continues  to remain a semi-colony of Russia. Accordingly, our freedom is  secondary and derived from the prospects of Armenia's liberation from  the status of a semi-colony, "he stressed.

It should be reminded that on February 24 the Court of General  Jurisdiction of Yerevan considered the members of the "Sasna Tsrer"  armed group guilty in hostage-taking, illegal storage, theft of  weapons and murder. By the court decision Pavlik Manukyan was  sentenced to 10, Varuzhan Avetisyan to 7 years and 4 months in  prison. The court found Smbat Barseghyan guilty of the murder of two  policemen, Artur Vanoyan and Yuri Tepanosyan, and sentenced him to 25  years in prison. Gagik Yeghiazaryan was sentenced to 7 years and 5  months, Areg Kyureghian to 7 years and 1 month, Armen Bilyan to 4  years, Sedrak Nazaryan to 8 years and 2 months, Edward Grigoryan to 6  years and 6 months, Mkhitar Avetisyan to 7 years and 6 months of  imprisonment. All of theconvicted do not plead guilty and intend to  appeal the verdict in the Court of Appeal.

According to Avetisyan's estimates, Armenia's dependence on Russia  has significantly increased following the 44-day war. And the country  is gradually turning into a bargaining chip in the political  bargaining between Moscow and Ankara. Accordingly, the threat of an  attempt to use the scenario tested in Artsakh in the rest of Armenia  is growing.

The need to expand the Russian military presence in Armenia, voiced  recently by Armenian Defense Minister Vagharshak Harutyunyan, was  described by Avetisyan as part of the process of turning the Armenian  Armed Forces into an appendage of the Russian army. In his opinion,  this is part of the process of reducing and withdrawing the Armenian  army from Artsakh. Moreover, as a result of the redeployment of a  part of the 102nd Russian military base from Gyumri to the south of  Armenia, according to the opposition politician, it suddenly became  clear that "the Turks will not swallow us anymore." "In the light of  all the recent processes, we have already announced the beginning of  a new stage in our national liberation struggle. It starts on March  16, the day of the conclusion of the Russian-Turkish, Moscow Treaty.  There will be rallies and other protest actions. We continue to  develop campaign in order to raise our people to their feet and free  our country from the colonial regime. Acting in a situation of hybrid  war, we perfectly understand all the difficulties on this long path,  "he said.  According to Avetisyan, the media, "analysts", "political  scientists", lawyers, officials of various caliber are involved in  the campaign against "Sasna Tsrer". All of them pursue one goal - to  discredit, respectively, neutralize the national liberation movement.  A similar state of affairs with the participation of the head of the  current government has been going on for almost 5 years. And,  according to his estimates, it has already become natural for the  "Sasan Tsrer" members.