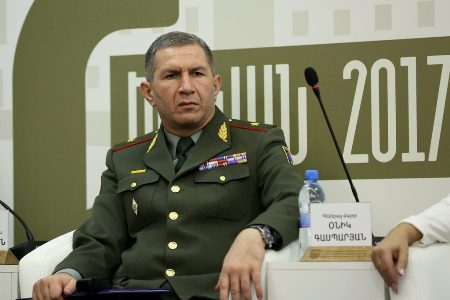 ArmInfo.In Stepanakert, the fact of the meeting of Artsakh President Arayik Harutyunyan with the Chief of the General Staff of Armenia Onik Gasparyan was  confirmed.

Thus, Spoeksperon of the Artsakh President Lusine Avanesyan, in an  interview with Artsakhpress, commenting on the information circulated  by the media regarding the mediation efforts of Arayik Harutyunyan,  in particular, stated: "In accordance with the earlier announced  readiness for mediation, President Harutyunyan also held meetings  with Nikol Pashinyan, and with Onik Gasparyan.  He discussed with  them some issues related to overcoming the current situation, taking  as a basis the priorities of internal stability and external security  of Armenia and Artsakh. During the meeting with Gasparyan, the issue  of resignation was not discussed at all, and there can be no question  of any pressure.  As for the format of the meeting, it was attended  not only by the director of the NSS of Armenia Armen Abazyan, but  also the secretary of the Artsakh Security Council Vitaly Balasanyan  and another official.  As stated by the President of the Republic, he  continues to maintain neutrality in relation to internal political  events in Armenia, and his mediation efforts are aimed at overcoming  the crisis. "

Earlier, the media circulated information that Artsakh President  Arayik Harutyunyan together with RA NSS Director Armen Abazyan  visited Onik Gasparyan in the evening and allegedly "demanded" the  resignation of the Chief of the General Staff of the Armenian Armed  Forces. It was also reported that Gasparyan not only categorically  refused to resign, but also slapped the President of Artsakh. It was  also reported that Vitaly Balasanyan expressed full support for  Gasparyan.

It is also worth noting that late in the evening, the Armenian  National Army issued a statement on its Facebook page, in which it  emphasized that the head of the General Staff of Armenia Onik  Gasparyan categorically rejected the demand for resignation.

"Head of the General Staff of Armenia Onik Gasparyan categorically  rejected the demand for resignation, stating that the demands of the  army cannot be changed. The generals sent a signal to Pashinyan that  if pressure on Gasparyan continues, the situation will worsen even  more," the statement said.