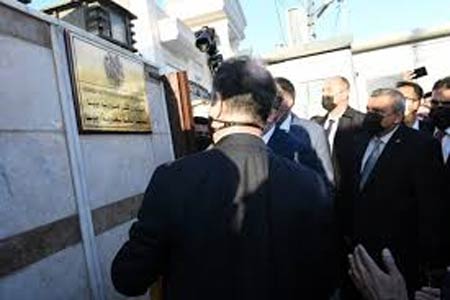 ArmInfo. The opening ceremony of the Consulate General of Armenia took place in Erbil.

According to the press service of the Armenian Foreign Ministry, in  his welcoming speech, the Consul General of Armenia in Erbil Arshak  Manukyan presented the goals of the diplomatic mission and the  upcoming programs. The Consul General noted that in recent months,  thanks to active contacts with partners from Iraqi Kurdistan, an  agenda of mutual interest has already been formed, and expressed his  readiness to make efforts to implement it.

RA Deputy Foreign Minister Artak Apitonyan, who is on a visit to  Iraqi Kurdistan, also delivered a welcoming speech. According to him,  the dynamically developing relations between Armenia and Iraqi  Kurdistan is based on strong historical ties and friendship between  the two peoples.  "Today is a truly significant event in the history  of Armenian-Iraqi relations. Armenia has always attached great  importance to the development of relations with the Republic of Iraq,  culminating in the opening of the Consulate General of the Republic  of Armenia in Erbil. Armenians settled in this country at different  stages of history, including the Iraqi Kurdistan, and received an  extremely friendly attitude from the authorities, "said the deputy  minister.

Director of the Ministry of Foreign Affairs Safin Dizayn made a  welcoming speech on behalf of the government of Iraqi Kurdistan, who  highly appreciated the decision of the Armenian authorities to open a  consulate general in Erbil and on behalf of his government promised  the full support of the authorities.

Within the framework of his visit to Iraqi Kurdistan, Apitonyan met  with the chairman of the Kurdistan Democratic Party Massoud Barzani.

At the meeting, Massoud Barzani highly appreciated the decision of  the Armenian authorities to open a consulate general in Erbil,  stressing that the RA diplomatic mission will become an incentive for  the development of relations between the two friendly peoples.

In turn, Apitonyan stressed that Armenia attaches importance to the  development of multifaceted cooperation with the Kurdistan Region and  expressed confidence that the opening of the Consulate General of the  Republic of Armenia in Erbil would make a great contribution to  further strengthening the mutually beneficial agenda. At the same  time, he pointed to the need to deepen ties in the political, trade,  economic, cultural, educational and humanitarian spheres.  During the  meeting, the interlocutors also exchanged views on a number of issues  on the regional and international agenda.