Iskander developer: Even if the ballistic missile warhead worked only for the ridiculous 10% indicated by Pashinyan Baku would face serious losses 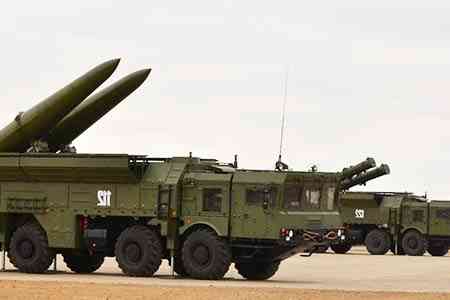 ArmInfo. Military observer of "Komsomolskaya Pravda", retired colonel Viktor Baranets turned to one of the developers of "Iskander", an outstanding Russian scientist, doctor of sciences, designer with 37 years of experience Vladimir Kovalev with a request to assess the statement of the Prime Minister of Armenia Nikol Pashinyan that that the Iskander tactical ballistic missile system was used during the latest hostilities in the zone of the Karabakh conflict, but it worked only by 10%.

"Declaring the inoperability of the Russian Iskander missiles, Pashinyan should, as they say, watch his mouth. To make such serious claims to the missile system and at the same time publicly admit that he" does not know "the essence of the issue - this is unworthy and even dishonorable for the prime minister of Armenia. Well, his statement about "weapons of the 80s" is already a sign of an ignorant amateur. What kind of "weapons of the 80s" can we talk about, if even the Russian army finished arming itself with Iskander only at the end of 2019? Armenia received several such complexes in the export version even earlier, after all, we are allies, "Kovalev emphasized.

At the same time, the military designer stressed that he personally witnessed the tests of the complex dozens of times and never once remembered a case that the warhead did not explode - not once!

And in order for this to happen, it is probably necessary either to "unscrew" the warhead from the missile altogether, or to entrust the maintenance of the complex to amateurs. And here we still need to figure out - weren't the profane servicing the Iskanders before the shooting? Do you know what else I thought when Pashinyan said that the missile's warhead exploded by only 10%? That the Prime Minister urgently needs to eliminate his illiteracy! Yes, Yes! He needs nuts-and-bolls course! Apparently, he was either a poor student at school, or he heard out of his ear that the capacity of the warhead of the export Iskander is 10% lower than that of the Russian one. Moscow has never hidden this from Yerevan! But Pashinyan got everything wrong, "the scientist believes.

In his opinion, such absurdity does not exist even in famous Armenian anecdotes. Kovalev also pointed out that Pashinyan kept silent about a very important thing: when a pair of poorly targeted missiles of the Armenian Iskander exploded near those very strategically important oil and gas facilities of Azerbaijan, Baku clearly realized that they had to tie up with the war. "And you, too, should understand what colossal losses the economy of Azerbaijan would have, even if the Iskander warhead only worked for the ridiculous 10% indicated by Pashinyan... Baku would face serious losses:" one of the developers of the famous missile system summed up.