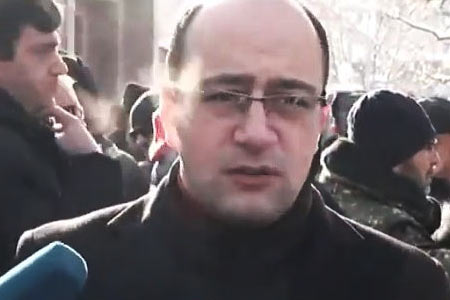 ArmInfo. The youth wing of ARF "Dashnaktsutyun" and the Youth Organization of the Republican Party of Armenia Ayk Mamidzhanyan with their centenarians held a  protest action in all the registered schools of Armenia, accepting  students.

Young people, demanding resignations Pashinyan started his protest  action in the building of the Yerevan State University. They licked  the back of the EGU and called the students, and also the  professor-lecturer composition of the school registration team joined  the action protest movement.  In the corridor, participatory actions  were found with i.o. Rector EGU Gegamom Gevorkyan.  ARFD member  Kristine Vardanyan, addressing him, asked: "What is the meaning of  your work, when in Armenia is a treacherous government? What does it  mean, what does it do for its work? Divorce does not affect the part   of all of us now? No one thinks about it, what is happening to them   when it comes to them." To what Gevorkian noted, he stated his  position on November 20, which concludes in the volume, which's right  to submit to resignation. "But this does not mean that all public  order should be disturbed when you are still busy and busy," he  added.

After the participants took part in the protest for the sixth time at  the University of Economics, the police started to protest the  entrance of the protesters in the building of the university, closing   the doors. At the same time, students from other corps discovered  doors and participatory actions to smuggle their own information  action.

How did the head of the Youth Organization of the Republican Parties  of Armenia, Hayk Mamidzhan, think that many young people do not care  what they share. "I'm here and there, to tell them what the necessary  love action of innocence is, for example, to take to the store, it is  possible to say:  "Nicol betrayer!", and it is possible to gather  friends and cross the street ", - he said.

The organizers of the actions stated that the daily actions of those   hotels show that they are deputies from the right-wing factions of   "My Shag" Andranik Kocharyan, that they do not have money, and they   can not close the doors, and they will come to you. At that point,   they added that they would not be threatened by the use of weapons.   Place with them those who read, who do not do anything wrong, do not  break and do not pick, do not ask to bring their civic position.

Demonstrators in their action chanted innocence <Nicole the  betrayer>, <Nicol  the Turk>, <Nicol leave>.  After conducting  agitation actions in two RA universities, the protesters dispersed at  home, at which point I underlined that the actions of a similar  character would be prolonged.