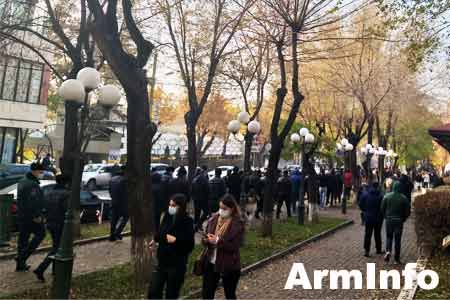 ArmInfo. The old robber's statements about the possible use of fire against the people are not surprising.

Ishkhan Saghatelyan, a representative of the ARF Supreme  Council, coordinator of the protest action of the Movement to Save  the Motherland, told reporters before the start of the action of  disobedience, commenting on the statement of Andranik Kocharyan, a  lawmaker from the ruling My Step bloc, that "if the opposition thinks  that it can occupy buildings, it should realize that these buildings  are under state protection, which means that the state has a monopoly  right to open fire to protect them>.

"This old robber's statement is nothing new to us. Wanting to say  they're ready to shoot people? It would be better if they directed  this fire against the enemy. These authorities are responsible for  killing more than 10 thousand of our citizens - this is both a war  and an ineffective fight against the coronavirus pandemic. This old  robber knows what awaits him after the removal of their regime from  power. Let them not try to intimidate our people. We will not succumb  to provocations, but we will not allow our people to be terrorized.

And the aforementioned person will be held accountable for all his  actions starting from theft during an earthquake to intimidation and  blackmail of his associates in parliament. We will force this regime  to leave by our consistent steps, "Saghatelyan said, adding that they  intend to constitutionally remove the current regime headed by Prime  Minister Nikol Pashinyan from power. He once again stressed that  Pashinyan, who is the de facto leader of the country, bears full  responsibility for the situation in the country.

After that, the disobedience procession of the Movement to Save the  Motherland started in the administrative district of Arabkir in the  city of Yerevan, in a park near the Prague hotel. Quite a large  number of citizens gathered in the street.

Hundreds of citizens march along Komitas Avenue in the direction of  Baghramyan Avenue. The final point of the procession is the square of  France. There will be an action of disobedience. The demonstrators  are chanting "Armenia without Nikol!", "Nikol the traitor!"