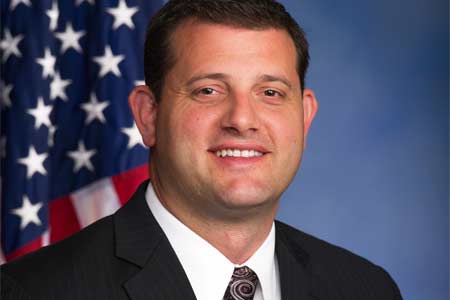 ArmInfo.The Armenian National Committee of America (ANCA) welcomes Congressman David Valadao - a longtime defender of Artsakh and Armenia on Capitol Hill - as the new co-chair of the Congress Group on Armenian Issues.

"ANCA welcomes Congressman Valadao's leadership in the Congressional  Armenian Issues Group," said ANCA Chairman Raffi Amparian. "The fact  that Congressman Valadao was included in the influential House  Appropriations Committee earlier this month, which oversees all  federal spending, will make him an even more important ally in the US  humanitarian aid package that we strive to provide to the heroic  people of Artsakh, "the ANCA chairman added.

In a statement released earlier today, member of the House of  Representatives Valadao noted the importance of strengthening  relations between the United States, Armenia and Artsakh. "Armenia is  a country that many of my voters know and love," said Congressman  Valadao. "During my time in Congress, I presented several resolutions  recognizing the deportation and destruction of more than two million  Armenians by the Ottoman Empire, and after many years the Armenian  American propaganda The House of Representatives and Senate finally  made this important decision. However, my fight must continue.   Armenians living in Nagorno-Karabakh have recently been attacked by  Azerbaijani troops in violation of a ceasefire agreement. Such  aggression is unacceptable and must stop immediately. I am determined  to work with my colleagues in Congress on this and other issues of  importance to the Armenian-American community, as Co-Chair of the  Congress Group on Armenian Issues. We must continue to protect the  interests of the Armenian people and encourage the new administration  to maintain and strengthen relations between the United States,  Armenia and Artsakh, "the Congressman said.  Group Co-Chair Frank  Pallone welcomed Valadao to the leadership of the faction. In a  statement released today, Congressman Pallone noted: "The  Congressional Armenian Issues Group has always acted on a bipartisan  principle, and I know that our current co-chairs continue this  tradition. I am confident that we will work together to ensure that  the United States' relationship with Armenia is strengthened and  supported by its young, democratically elected government, which was  shaken by last year's destructive aggression by Azerbaijani and  Turkish forces in the region. I look forward to working with my  colleagues in Caucus to ensure that the new secretary of state and  defense minister are focused on reassessing our strategic  relationship in the Caucasus region, upholding the principle of human  rights and bringing bad actors like Turkish President Erdogan to  justice. " Congressman Valadao, who returned to Congress this year  after a bitter election campaign, has a long history of championing  issues of particular concern to Armenians. In 2017, he traveled to  Artsakh, despite objections from the State Department, and  spearheaded the adoption of an amendment, according to which  humanitarian aid is used to demine Artsakh.  To remind,  in 1995 a  bipartisan group of congressmen on Armenian issues, the Armenian  Caucus, was created in the US Congress. It was founded by Democrat  Frank Pallone and Republican Edward Porter.