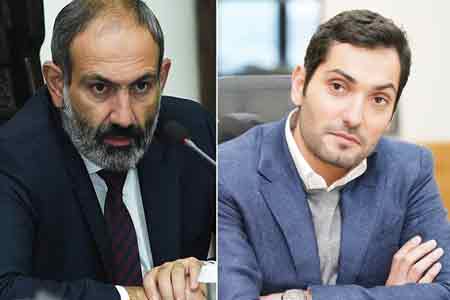 ArmInfo. On January 25, the Court of General Jurisdiction of Yerevan announced the verdict in the Khachatrian civil case against the administration of the Prime  Minister of the Republic of Armenia, Prime Minister Nikol Pashinyan  and Mane Gevorgyan (Prime Minister's Spokesperson), which was  initiated at the request of Gagik, Gurgen and Artyom Khachatryan  after Spokesperson Mane Gevorgyan posted an insulting and defamatory  post on her page on facebook.com on 28 April 2020.

The Khachatryans demanded an apology for the insulting expression addressed to them,  as well as a refutation of the defamatory information. The court  found it reasonable and confirmed that the statements of the RA Prime  Minister through his spokesperson were found to be offensive,  defamatory, and satisfied the claim of the plaintiffs in this regard,  the team of lawyers of the Khachatryan family reported.

In particular, the court ruled to oblige the defendant of the RA  Prime Minister Nikol Vovaevich Pashinyan to refute the public post  published by the Spokesperson of the RA Prime Minister on April 28,  2020 on Mane Gevorgyan's official Facebook page (quote): <Within five  days after the verdict enters legal force on the page of Mane  Gevorgyan on Facebook, publish the following content: <Prime Minister  of the Republic of Armenia Nikol Pashinyan apologizes to Gagik,  Gurgen and Artyom Khachatryans for the expression that offends their  honor and dignity, in a message posted on Mane Gevorgyan's  facebook.com page on April 28, 2020, a statement that " Gagik  Khachatryan and his sons manage a corrupt mafia system, as well as  have accumulated illegal property." Gagik Khachatryan and his sons  accepted the fact that they or other family members caused damage to  the state, the fact of looting or expressed their readiness to return  something to the state as loot'' is not true.

If it is impossible to post the texts of apologies or denials on the  facebook.com account of the social network of the Spokesperson of the  RA Prime Minister Nikol Vovaevich Pashinyan Mane Gevorgyan to oblige  to apologize within five working days after the entry into force of  the decision or publish the text with the same content of the apology  through the consumer newspaper that is published throughout the  territory of the Republic of Armenia in an amount of at least 5,000  (five thousand) copies. "

The plaintiffs did not file a claim for compensation for material  damage, however, a claim was filed for compensation of legal costs by  the Prime Minister of the Republic of Armenia Nikol Vovaevich  Pashinyan, which was partially satisfied in favor of Gagik  Gurgenovich Khachatryan, Gurgen Gagikovich Khachatryan and Artyom  Gagikovich Khachatryan in the amount of 8,000 (eight thousand) drams  as an advance payment of the state fee, and 500,000 (five hundred  thousand) drams as confiscation of reasonable remuneration of a  lawyer. The decision comes into force one month after its  publication, within the same period it can be appealed to the RA  Civil Court of Appeal.