Candidate for Prime Minister: If we completely lost Artsakh, Russia  would have nothing to do here 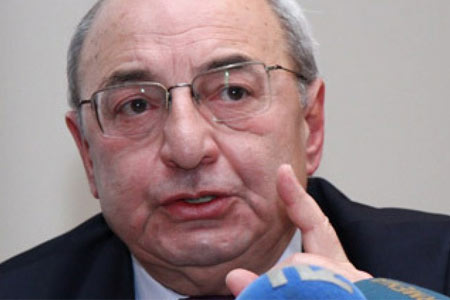 ArmInfo.Nikol Pashinyan is lying, he did not stop the war, Russia imposed peace on him, because if we completely lost Artsakh, Russia would have nothing to do here.   Opposition candidate for Prime Minister Vazgen Manukyan stated this  at a meeting with residents of Ararat region.

Manukyan noted that if Armenia lost Artsakh, Russia would not be able  to place its peacekeeping contingent here and would lose the South  Caucasus.

"The closest connection with Russia was the Artsakh problem. If there  is no Artsakh, then there is no Russia in the region. Thus, the  Caucasus would completely fall under Turkish control. Secret  negotiations with Azerbaijan and Turkey are ongoing. After the war,  the situation continued to deteriorate. In a trilateral statement, it  was written that the armies should remain in their taken places, but  our army returned to Syunik from Kubatlu and Zangelan. Syunik is in  danger, "the candidate for prime minister stressed.

Vazgen Manukyan also spoke about the proposed unblocking of  infrastructure in the region. "The authorities say that we will open  the roads so we can use them. They lie; only Turkey and Azerbaijan  will use these roads. Azerbaijanis attacked Armenian trucks in  Georgia yesterday. If we will not be able to transport cargo through  the territory of Georgia normally because of the attack of  Azerbaijanis, then how and what kind of cargo will we transport  through Azerbaijan? Or how we will ensure the safety of people who  choose to take these routes. The whole goal is to open the road to  Nakhijevan," he stressed.

Manukyan also touched upon the war in Artsakh. "Two weeks before the  end of the war, I wrote an article, after which public criticism  rained down on me. I offered the military to take power in the  country.

In other countries, in such cases, when the military sees that they  are being defeated, the military temporarily takes power into their  own hands, for 1-2-3 years. They finish everything; again hand over  power to the civil authorities. For example, in Turkey this happened  several times. This did not happen in Armenia. I think that people  who could have made such a decision have already left the army. Those  who were probably left with courage and civic feelings were probably  not so strong.

During the war, I called the generals of Artsakh and told them that  they must take power into their own hands, not allow Arayik  Harutyunyan to carry out Pashinyan's orders. Unfortunately, this has  not happened.  This is a disadvantage of our army. It turned out that  there is no such person in our army>, Vazgen Manukyan said.