ASALA will revise its course of action within the 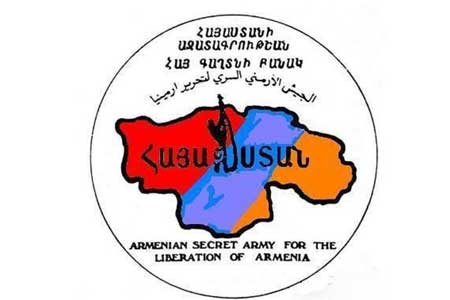 ArmInfo. The Armenian Secret Army for the Liberation of Armenia (ASALA) will revise its course of action within the framework of a "tactical pause", developing a new  strategy of rational action based on the current geopolitical  realities, which must correspond to the mission of protecting  Armenia. This is stated in the statement of the organization, which  was received by ArmInfo the day before, referring to the text  published on the ardarutyun.am Internet resource on January 20.

As stated in the Organization's statement, "the defeat of the  Armenian side in the last war unleashed by the Turkish-Azerbaijani  hostile alliance against the republics of Armenia and Artsakh was the  last link and the logical end of the chain of failures that began  with the restoration of the country's independence."

The statement stresses, in particular: "The defeat of Armenia  continues to this day. It can be said unequivocally that we lost the  war in advance. We lost, because for thirty years we have destroyed  education, trampled on science, distorted culture, distorted values,  plundered national wealth and, most importantly, despised and  humiliated the Armenian person, the most important unit for building  a worthy, strong state. Left to their own devices, people will not  turn into a nation, at best they will become an invertebrate crowd  that is easy to manipulate>.

The statement also notes that the country ignored the principles of :  "not humiliating a person", "not neglecting values", "no one is above  the law" and "not to miss the moment and opportunity", which are  important for state building. "The current situation undoubtedly  proves that the regime that took over the leadership of the Republic  of Armenia at this historical stage, along with its enormous  responsibility for the outcome of the war, should receive a political  and legal assessment. In fact, we gave our land at the disposal of  another power," the statement says.

According to ASALA, this reality discredits the reputation of the  Republic of Armenia at the international and regional levels,  humiliates statehood, despite the fact that this foreign power is  often called a strategic ally. ASALA considers this position is  justified by the fact that the Republic of Armenia has actually  abandoned its obligations to guarantee the security of the Republic  of Artsakh and its people, and demonstrates a criminal inaction in  ensuring the inviolability and reliable protection of the  internationally recognized borders of Armenia. "In this case, the  Republic of Armenia voluntarily or forcibly refuses or terminates its  mission and obligation to be the defender of pan-Armenian desires,  goals and interests," the statement said.

As the statement says, "ASALA agreed with the restoration of  Armenia's independence, giving priority to state building, ensuring  national and state security, as well as the smooth and safe  implementation of the process of strengthening the state,  understanding the huge role of Armenia. Therefore, it has took a  "tactical pause" in its activities in the national liberation armed  struggle. ASALA hoped that a strong Armenia with its strong statehood  would become the main and irreplaceable stronghold and guarantee for  the protection of the common Armenian interests. "Accordingly, at the  present time, with the decrease in the sovereignty of the Republic of  Armenia, ASALA should reconsider its behavior within the framework of  a tactical pause, developing a new strategy of reasonable actions  based on the current geopolitical realities, which must correspond to  the mission of protecting Armenia," the statement said.

To note, the Armenian Secret Army for the Liberation of Armenia in  open sources is considered an Armenian militarized organization that  existed since 1975 and, as it was believed earlier, until the early  1990s. In some sources, it is called a terrorist organization, in  others - a partisan or simply an armed organization. ASALA was  founded in 1975 in Lebanon by people from Armenian families who  survived the Armenian Genocide in Ottoman Turkey. According to  scientists who have studied the scientific "quintessence of ASALA",  in their activities, the members of the group adhered to a strategy  of individual terror directed against the officials of Turkey and the  allied countries supporting the political course of Turkey. The group  also carried out terrorist attacks on the territory of countries that  held ASALA members in custody. The participants called the  elimination of "Turkish colonialism", American imperialism, Zionism  and the unification of their historical territories lost by the  Armenian people as a result of the Genocide of 1915, which claimed  the lives of 1.5 million Armenians, as their goal.