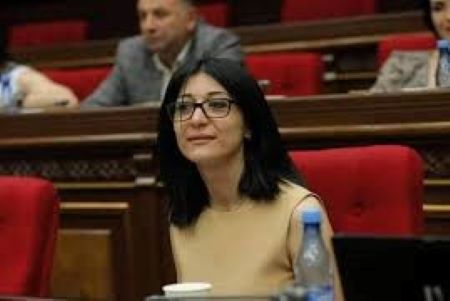 ArmInfo.  Arpi Davoyan, a MP from  the ruling My Step bloc, continues to insist that the main problems  in Armenia come from the opposition. The MP said this in an interview  with reporters.

To note, earlier Davoyan said from the rostrum of the parliament that  the opposition is one of the biggest problems in the country. After  that, her words were harshly condemned by representatives of various  opposition parties, including the parliamentary opposition.

According to Davoyan, her opinion on the opposition has not changed.  When asked what problems the opposition is creating in the country at  the moment, the MP said: "There must be a healthy opposition in any  country. The existence of the opposition is one of the most important  institutions for the development of the state.

The state should have an important agenda, but this is not the case  in our country. The opposition has only one agenda today - the  seizure of power. Criticism of these people is not healthy. They base  their position is the desire to come to power. When the opposition  makes such statements to the people, such an attitude towards the  authorities cannot but be considered a problem, "the MP noted.