MP: The logic is not clear why a woman who is only fluent in English  can be appointed the Ambassador of Armenia to the United States 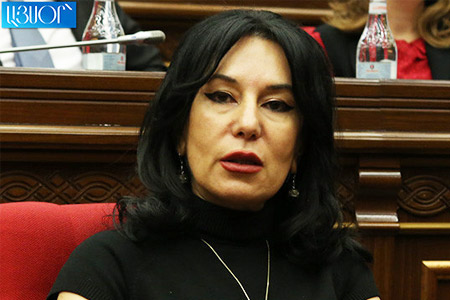 ArmInfo. The appointment of the  head of the parliamentary faction "My Step" Lilit Makunts to the post  of Armenian Ambassador to the United States nullifies the  international reputation of our country. Naira Zohrabyan, MP from the  "Prosperous Armenia" faction, said this in an interview with  journalists.

"I would like to remind you how Nikol Pashinyan, being an opposition  deputy, complained that the country's authorities appoint ambassadors  based on family ties, he constantly said that professional diplomats  should be ambassadors. And now, a woman is appointed as an ambassador  to one of the co- chairing countries of the OSCE Minsk Group, who is  simply fluent in English. This is a disaster, "Zohrabyan said.

She stressed that today, in the person of Nikol Pashinyan, we see a  person who makes the complete opposite of everything that he has been  promoting for years as a representative of the opposition faction.   "I already refuse to talk about the catastrophic consequences that  this may have for Armenia. Today we have a disintegrated state, each  such decision is a direct blow to statehood. One gets the impression  that Nikol Pashinyan wants to place his people in the most  comfortable conditions. He understands perfectly well that if not  today, then tomorrow the time of political and legal responsibility  will surely come, he wants to withdraw his proteges from Armenia,  "the MP concluded.