Taguhi Tovmasyan: Artsakh is under blockade and this is unacceptable 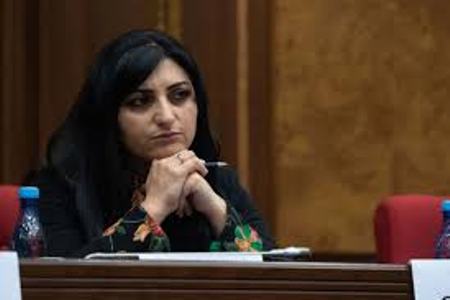 ArmInfo. Artsakh is under  blockadeamd this is unacceptable.  Independent MP Taguhi Tovmasyan  stated this in an interview with journalists.

The MP said that in the coming days the citizens of Armenia intend to  block the roads, demanding to open the Vardenis-Karvachar highway.  According to Tovmasyan, residents of the Gegharkunik region of  Armenia contacted her; they are dissatisfied with the fact that the  highway is closed and intend to hold protest actions until the issue  is resolved.

"The authorities are obliged to take into account the demands of the  citizens of Armenia, the issue of the Vardenis-Karvachar road should  be discussed. A few days ago, residents of Artsakh also held protests  with a similar demand. Documents were signed on unblocking  infrastructure in the region, so why is Artsakh in a blockade? This  state of affairs creates problems, first of all, for those citizens  who work in Artsakh. Now, to get to Artsakh, one should use the old  road, which is much longer. This issue should be resolved as soon as  possible at the interstate level. I intend to apply to the Foreign  Ministry on this issue," Tovmasyan said.  The MP said that people are  going to block roads of great importance.

As for the statement of Prime Minister of Armenia Nikol Pashinyan  regarding Shushi, the MP said that Shushi is an Armenian city, and  her favorite.