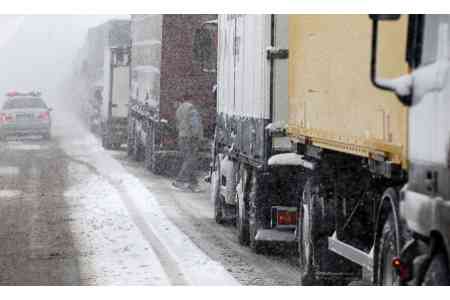 ArmInfo.  The RA Ministry of  Emergency Situations informs that there are closed highways in  Armenia.

Thus, the roads leading from the high-mountain meteorological station  "Amberd" to the fortress of Amberd and Lake Kari of the Aragatsotn  region are closed. Also, the Vardenyats Pass is closed for all types  of vehicles. Roads on the Chiva-Yelpin and Saravan-Zanger highways of  the Vayots Dzor region are icy. Roads in Syunik region are difficult  to pass. Ice is also observed on the road leading to the city of  Jermuk and on the interstate highway eading to the Kotayk region.   According to the data received from the Department of Emergency  Situations of the Ministry of Internal Affairs of Georgia and the  Department of the Crisis Management Center of North Ossetia of the  Ministry of Emergency Situations of the Russian Federation, the  Stepantsminda-Lars highway is open only for passenger vehicles, as  there is a threat of an avalanche. From the Russian side, 820 trucks  have accumulated.

According to the information received from the Ministry of Foreign  Affairs of the Republic of Armenia, the decision to ban the entry of  foreign citizens into Georgia remains in force. The ban does not  apply to cargo transportation.