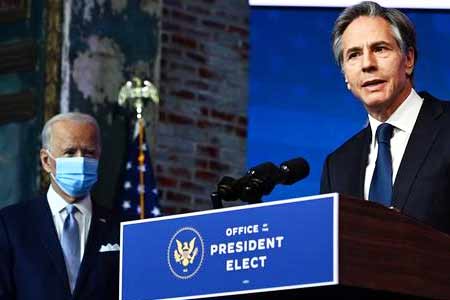 ArmInfo. Responding to  Senator Markey's question on the Armenian Genocide, Secretary of  State-designate Blinken reiterated Biden's pledge to recognize the  Armenian Genocide, the press service of the Armenian Assembly of  America (AAA) informs. "As a presidential candidate, President Biden  pledged in his Remembrance Day statement to support a resolution  recognizing the Armenian genocide. Our Administration will be  committed to prioritizing human rights and ensuring such a tragedy is  not repeated. The Administration will determine the wording for the  White House statement to mark Remembrance Day once in office and will  consult with Congress on this important issue."

In addition to the Armenian Genocide, Blinken stated that the  Administration will "reinvigorate U.S. engagement to find a permanent  settlement to the Nagorno-Karabakh conflict that protects the  security of Nagorno- Karabakh." The Assembly fully supports this  position. The safety and security of the people of Artsakh are  critically important, as is the immediate release of prisoners of war  still being held by Azerbaijan, despite an agreement to release all  POWs.  Given the six-week war launched by Azerbaijan against the  Armenian people, Blinken indicated that the Administration "will  review" U.S. security assistance to Azerbaijan. The Assembly strongly  supports and urges the Biden-Harris Administration to fully enforce  Section 907 of the Freedom Support Act, which was enacted in 1992 in  direct response to Azerbaijan's hostile actions against Armenia and  Artsakh.

Blinken also committed to work to ensure that the humanitarian needs  of the Armenian people - due to the war - are met, and underscored  his strong support for "U.S. funding for demining efforts in  Nagorno-Karabakh," which was phased out under the previous  Administration. Additionally, Blinken indicated his support for the  "provision to Armenia of security assistance and aid to strengthen  democratic governance and promote economic growth, both of which will  help to strengthen Armenia's security and resilience."

"The Assembly welcomes Secretary of State-designate Blinken's  responses in support of Armenia and Artsakh, which are consistent  with the commitments made by President Biden and Vice President  Harris, and appreciates his use of the term Armenian Genocide, which  is a clear break from past Secretary of State nominees," stated  Assembly Executive Director Bryan Ardouny.

"We thank Senator Menendez and Senator Markey for their ongoing  leadership and support for the people of Armenia and Artsakh,  especially during this critical post-war period and the resulting  humanitarian crisis," added Ardouny.