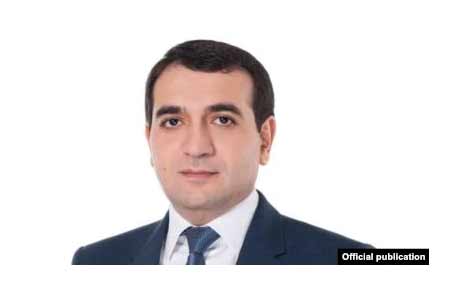 ArmInfo.At the meeting on January 21, the Armenian government approved the candidacy of Hovhannes Harutyunyan for the post of governor of Shirak region.  "It  is a great honor for me to serve the Republic of Armenia and the  Armenian people, especially in this difficult time," stressed  Harutyunyan.

He said that he received his education in the Russian Federation,  where he worked as a surgeon. In 2016, having completed retraining as  an organizer of the medical sector, he moved to live in Armenia. For  more than two years already in his homeland, Harutyunyan worked as  the director of the "Berlin" polyclinic in the Shirak region, after  which he headed the polyclinic at the "Surb Grigor Lusavorich"  medical center, and was also appointed to the post of deputy director  of the medical center for polyclinic services. Shortly thereafter,  Harutyunyan was appointed to the post of adviser to the Minister of  Health, and in April 2019 he is the Deputy Minister of Health (until  October 2019).

"I have experience in the system of public administration, and I am  ready to invest my education and skills in the development of Shirak  region," Harutyunyan said.

To remind, Tigran Petrosyan held the post of Governor of Shirak  region from February 2019 to January 2021.