Iveta Tonoyan: The only excuse of the prime minister is accusations  against the opposition 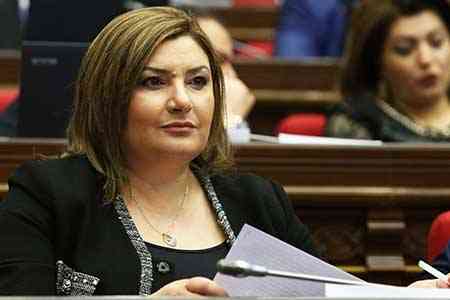 ArmInfo. During the government hour, the Prime Minister did not answer a single question from the opposition, his only excuse was the constant accusations against the  opposition. Iveta Tonoyan, MP from the "Prosperous Armenia" faction,  said this during a briefing in the parliament.

The MP noted that several of Pashinyan's statements go beyond common  sense. "In particular, a statement that the war could not have ended  with less territorial and human losses. This is a lie, since the  Prime Minister had this opportunity twice. Russian President Vladimir  Putin even spoke about this, however, Pashinyan refused these  opportunities, '' said Tonoyan.

She also stated that now a catastrophic situation has developed in  Armenia, as a huge number of people died, many were disabled, were  taken prisoner, people in Artsakh and Armenia lost their homes.   "After all that has happened, the Prime Minister makes  pro-Azerbaijani statements from the rostrum of the parliament. It is  unacceptable. Pashinyan stated that if we agreed to accept refugees  from Azerbaijan, Shushi would cease to be an Armenian city. This is  completely absurd. Since then we would have raised the issue of  Armenian refugees, would have decided who and when would have the  opportunity to return, now the city is completely in the clutches of  the enemy.

Moreover, the statement of November 9 clearly states that the sides  remain in their positions, then why did we surrender Karvachar and  Berdzor? Why did our Armed Forces surrender a number of borders in  Syunik? Even in Soviet Armenia, the village of Shurnukh was Armenian,  and now it is half ours and half Azerbaijani? Who draws borders  without normal specialists?>, Tonoyan asked.