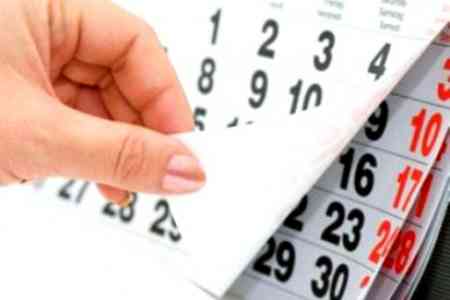 ArmInfoA new memorable date may appear in Armenia - the Day of National  Minorities. The RA National Assembly, at its session on January 20,  in the first reading, introduced amendments to the law "On Holidays  and Memorable Dates".

As one of the authors of the bill, Rustam Bakoyan, a deputy from the "My Step" faction, noted, although Armenia is a mono-ethnic country, nevertheless, there are about 11 national minorities living here, whose representatives, including, in  different periods, played their role in the history of Armenia .

"The legislation stipulates that they have the right to preserve  their national and ethnic identity, develop their national language,  traditions, faith and culture. This change will be another step that  will draw attention to ethnic minorities, their problems and needs,  and help find their solution." , - said Bakoyan. According to him,  there is a similar practice in Romania, India, Estonia and other  countries. The legislative amendments propose to celebrate the Day of  National Minorities in Armenia on the last Saturday of September,  since during this period the Council of National Minorities holds a  meeting and various events. For his part, Deputy Minister of  Education, Science, Culture and Sports Ara Khzmalyan noted that this  initiative emphasizes strong ties with friendly peoples, which  represent national minorities in Armenia.

"The consolidation at the  legislative level speaks of the need to also raise the level of  cultural events and present their cultural identity," Khzmalyan said.  Armenia is considered a mono-ethnic country, however, according to  the 2011 census, about 1.8% of the population are ethnic minorities.  There are 11 relatively large communities living in Armenia -  Yazidis, Assyrians, Greeks, Russians, Germans, Georgians, Kurds,  Poles, Ukrainians, Belarusians and Jews.