Poll: Yerevan residents are most concerned with public transport  problems 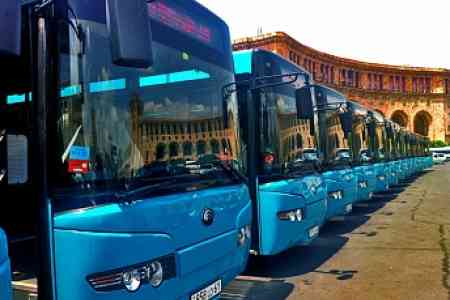 ArmInfo. Residents of the Armenian capital assess the changes in the capital over the past year rather positively than negatively.

This is evidenced by results of a survey of Yerevan residents conducted by one of the leading consulting companies in Armenia MPG (Marketing Professional Group).  Thus, the number of citizens who were more likely to be satisfied  with the changes averaged 48%, while a year earlier this figure was  slightly higher (59.7%). It should be noted that according to the  results of the survey for 2017, the number of those who rather  positively assess the changes in the city was 56.9%.

The biggest evil in the capital city residents consider the problems  with public transport. For 35.4% of respondents, this issue causes  the greatest concern, followed by the problem of cleaning and garbage  disposal (24%) and closes the three main problems of Yerevan - the  issue of unemployment, which was noted by only 10% of respondents.

According to the survey, the least of all Yerevan residents are  concerned about the greening of the city, the state of the  educational system and the practice of illegal construction (1.6%,  1.9% and 1.9%, respectively).  The work of the "revolutionary" Mayor  of Yerevan Hayk Marutyan was rated 2.9 points on a 5-point scale,  which is much lower than the assessment of the activities of the  heads of all administrative districts of the capital. In particular,  the highest score was awarded to the heads of the administrative  districts of the capital Malatia-Sebastia and Davidashen (4 points  each).

At the same time, during the Artsakh war, the work of Hayk Marutyan  was positively assessed by only 16.9% of the respondents, negatively  - by 19.6%, and 35.4% found it difficult to assess. However, the  majority of respondents do not see the need to hold early mayoral  elections (30.5%), while 21.8% voted for their holding, 12.9% found  it difficult to answer. 19.3% of the respondents expressed the  opinion that the elections should be held rather than not, while  15.6% believe that it is rather unnecessary. Note that the survey was  conducted through telephone calls to residents of Yerevan in the  period from 12 to 17 January this year, the sample size was 800, the  sampling error was +/- 3.5%.

In 2011, MPG became the official representative in Armenia of the  International Association Gallup, one of the most prestigious and  independent public opinion research organizations in the world. Since  2003, MPG, working in the market of sociological and marketing  research, has implemented more than 800 projects of various sizes.