Armenian Parliament ratified the convention on the legalization of  documents issued by affixing apostille. 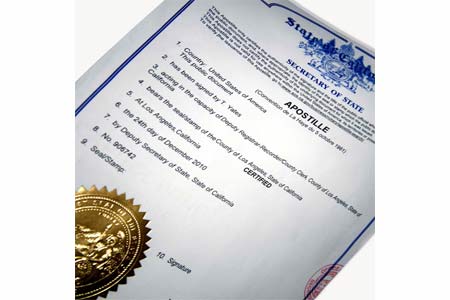 ArmInfo. The Armenian Parliament at the meeting on January 19 in the second and final reading ratified the Minsk Convention on the Legalization of  Documents Issued by Apostille.

According to the RA Deputy Minister of Justice Vaye Danielyan, for  the use of documents issued in Armenia, an apostille is a simplified  form of legalization of documents, which applies to the member states  that have ratified the Hague Convention on the Simplified  Legalization of Documents of October 5, 1961.  Armenia has been a  state party to the Hague Convention since 1993. The apostille  certifies the authenticity of the signature, the quality in which the  person who signed the document performed, and, where appropriate, the  authenticity of the seal or stamp that affixes this document.  Apostille in Armenia is a quadrangular stamp with side dimensions of  at least 9 centimeters in Armenian and English, containing the  obligatory heading <Apostille> and a reference to the 1961 Hague  Convention in French (Convention de La Haye du 5 octobre 1961). The  content of the stamp is prescribed by the Hague Convention. Apostille  is placed exclusively on the original or on a notarized copy if the  original cannot be apostilled (for example, passport, driver's  license). The documents must be in good condition, with a  well-visible seal and signature.  The documents should not contain  any extraneous inscriptions or marks.

Apostille is placed on certificates of birth, death, marriage or  divorce, diplomas, certificates, any documents on education and  training and annexes thereto issued by educational institutions,  court decisions, notarized copies of documents, other notarized  documents (wills, powers of attorney, etc.) etc.), extracts from the  trade register, certificates of tax registration. To affix the  apostille, a state fee of 5000 AMD is charged.