Lilit Makunts: We are ready to discuss the issue of early elections 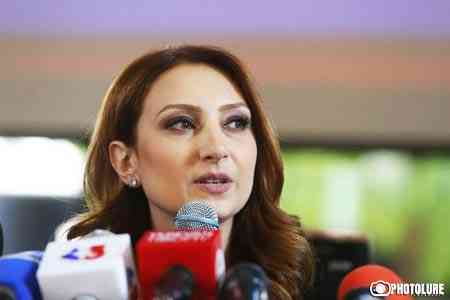 ArmInfo.The authorities do not object to the opposition's statements that the legitimacy of the country's leadership is now in question. This was stated by the head  of the "My Step" faction Lilit Makunts, discussing the proposal of  the "Enlightened Armenia" faction to include the program "Action Plan  for overcoming the situation in Armenia" proposed by them into the  agenda of the plenary session.

"We said that we are ready to discuss the issue of early elections and work in this direction," said Makunts. According to the MP, the "Enlightened Armenia" faction  proposes to put everything aside and discuss only the draft presented  by them with their agenda.

<This does not happen. Therefore, your proposal, despite your  statements that it is aimed at solving problems and easing tensions,  will receive a negative opinion, we will vote <against>. From your  statement, I can conclude that your actions are not aimed at solving  problems and easing tensions, but, on the contrary, at escalating  tensions, "the deputy said. PA head Edmon Marukyan noted that they  condemn the forcible removal of issues from the agenda. "We said that  it is wrong to act outside the Constitution, now you reject all our  actions within the framework of the Constitution. What would you  like? Do you want to take the processes out of the constitutional  course?>, Marukyan asked. As a result, 76 deputies voted "against",  37 "for". The program was not included in the agenda of the plenary  session of the National Assembly.