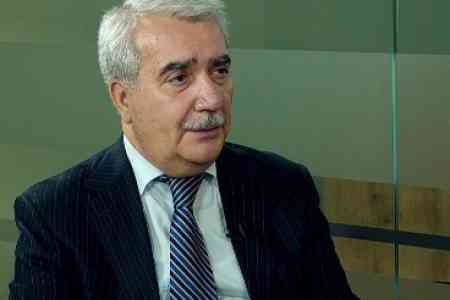 ArmInfo.Chairman of the Standing Committee on Defense and Security of the National Assembly of the Republic of Armenia Andranik Kocharyan is of the view that that it  would be good to study the report on the circumstances of the April  2016 war before the start of the Artsakh war in 2020. According to  the MP, the report reflects our mistakes, and if the report had been  published earlier, we could have eliminated them. The report will be  published shortly.

<There are facts to remember and learn from them. Our security  agencies should have paid more attention to their responsibilities.  If, after the publication of this report, the relevant authorities  see criminal acts or inaction on the part of anyone, of course, there  will be consequences. I personally see shortcomings here that should  have been eliminated immediately after the four-day war of 2016,  "Kocharyan said.

When asked whether it is worth forming a committee to study the  circumstances of this war, he said that it is too early to talk about  it. "I believe that this will lead to politicization, now it is  better to take a break and not look for traitors," Kocharyan  stressed, adding that this war played a sobering role.  "At the cost  of thousands of sacrifices, it seems that we will move from virtual  reality to the realm of bitter reality and understand what  obligations we have. I hope everyone will learn lessons from the  current situation, "the MP stressed.