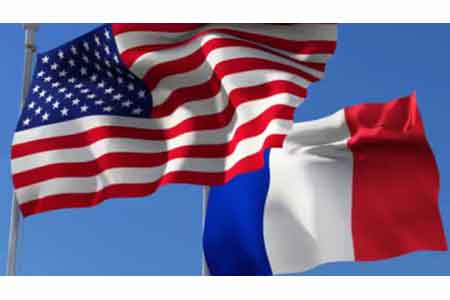 ArmInfo.  Deputy Foreign  Minister of Russia Andrei Rudenko informed US and French Ambassadors  John Sullivan and Pierre Levy about the results of negotiations  between Russian President Vladimir Putin and the leaders of  Azerbaijan and Armenia on the Nagorno- Karabakh settlement. This is  stated in the message of the Russian Foreign Ministry.

"During the meeting, the ambassadors were informed about the results  of negotiations between Russian President Vladimir Putin and  Azerbaijani President Ilham Aliyev and Armenian Prime Minister Nikol  Pashinyan on January 11. A thorough exchange of views took place on  further joint efforts of the OSCE Minsk Group co-chair countries  (Russia, USA, France) on the Nagorno-Karabakh settlement, "the  Russian Foreign Ministry said in a statement.

Recall that on January 11, trilateral talks between the leaders of  the Russian Federation, Azerbaijan and Armenia were held in the  Kremlin on the initiative of Vladimir Putin. The participants  reviewed the implementation of the joint statement on  Nagorno-Karabakh dated November 9 and discussed further steps to  solving problems in the region. Following the meeting, which lasted  almost four hours, a joint statement was signed on new infrastructure  projects in Nagorno-Karabakh, their implementation will be supervised  by a trilateral working group at the level of deputy prime ministers.