ANADOLU: Azerbaijan intends to negotiate with Russia on the  construction of a railway through the territory of Armenia 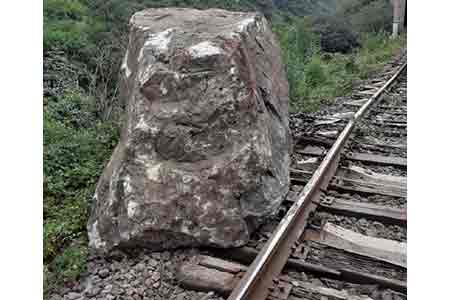 ArmInfo.. Work on the design of transport routes between the main part of Azerbaijan and Nakhichevan has already begun. This was reported by the Turkish state  agency "Anadolu".

According to the source, the matter concerns the restoration of the  railway line that operated during the Soviet period. The section from  Baku to the village of Horadiz has been preserved, while the rest -  the 166- kilometer section of the railway from Horadiz to the border  with Armenia - will have to be rebuilt.

It is reported that for the construction of a 43-kilometer section of  the railway, which passes through the territory of Armenia,  Azerbaijan will negotiate with Russia due to the fact that the  railways of Armenia are under the jurisdiction of the Russian  Railways.

The agency reports that a 158-kilometer section on the territory of  Nakhichevan - from Ordubad to Velidag station near the Turkish  border, will be overhauled. At the same time, it is reported that a  new section will be laid to the border with Armenia with a length of  14 km.

"If Yerevan decides to contribute to peace and stability in the  region, it will connect to the railway networks of Azerbaijan, which  will open the way for uninterrupted and profitable transport links  with Russia and Iran. Russia will similarly be able to supply its  goods to Armenia, Turkey and Iran through the territory of  Azerbaijan. Cargoes will be delivered to Iran through the Julfa  station in Nakhichevan, "the source says.

It should be reminded that a meeting of the leaders of Russia,  Armenia and Azerbaijan was held in Moscow yesterday, during which the  parties came to an agreement on the organization of the railway  communication.