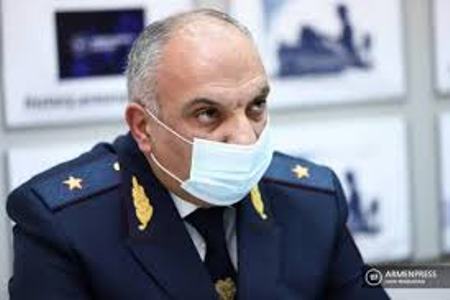 ArmInfo.  Military Prosecutor,  Deputy Prosecutor General of Armenia Vahe Harutyunyan met with the  employees of the Russian Prosecutor's Office, who serve in the  framework of servicing the peacekeeping forces of the RF Armed Forces  in the Republic of Artsakh. This was reported by the press service of  the Prosecutor General's Office.

According to the source, Vahe Harutyunyan thanked them for fulfilling  their official duties at a high level, stressing the importance of  promoting the normal functioning of the peacekeeping forces in  Artsakh, assistance in strengthening the security of the people of  Artsakh and the regional peace.

The Military Prosecutor stated that the conscientious work of the  employees of the Prosecutor's Office of the Russian Federation also  contributes to the rapprochement of relations between the prosecution  authorities of Armenia and Russia. According to Harutyunyan, an  important stimulus for the development of these relations was the  working visit of RA Prosecutor General Artur Davtyan to Moscow, the  meeting with the RF Prosecutor General Igor Krasnov and the  agreements reached.

Within the framework of these agreements, active measures are being  taken to return the Armenian prisoners of war in Azerbaijan, ensure  their safety and protect their fundamental rights.

From the point of view of excluding or minimizing cases of violation  of the ceasefire regime on the contact line between Artsakh and  Azerbaijan, ensuring control over the situation, the need to  establish strict control over such cases in the context of the  agreements reached between the Prosecutors General of Armenia and  Russia was noted.