The dismissed former head of the National Security Service of Armenia  Argishti Kyaramyan, who broke the silence, accused Vanetsyan of  running away from Shushi 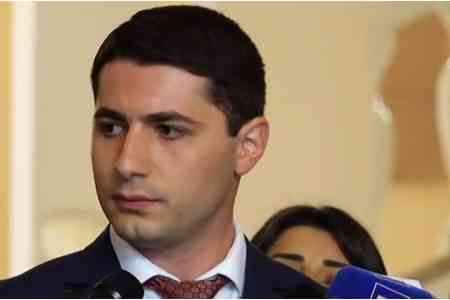 ArmInfo. Former head of the  National Security Service of Armenia Argishti Kyaramyan, who was  fired during the 44- day war, but after its end was appointed deputy  assessor of the Investigative Committee, broke the lingering silence.

In an interview with the Public Television of Armenia, Karamian told  his version of the capture of Shushi.  According to Kyaramyan, when  the situation near the city of Shushi escalated, he went to the city  where the former Minister of Defense of Armenia Seyran Ohanyan, who  was engaged in the defense of the city, was already staying.  Then  the ex-head of the National Security Service, head of the Motherland  party Artur Vanetsyan also arrived there. According to the Deputy  Chairman of the Investigative Committee, Vanetsyan and members of his  militia were placed in one of the buildings in Shushi. On the day of  the Azerbaijani offensive, Seyran Ohanyan asked Vanetsyan to take  positions, however, he said that he had arrived recently and was not  yet ready for battle. Then Ohanyan sent Karamian to Vanetsyan with a  proposal to take one of the defensive positions. The Deputy Chairman  of the Investigative Committee went to Vanetsyan and described the  situation. Vanetsyan did not argue and noticed that he was ready to  defend Shushi, he and Karamian went to the headquarters, where they  were given a task. Further, according to Kyaramyan, he escorted  Vanetsyan's detachment to the place of deployment.  The detachment  was also accompanied by one colonel, and he and Karamian decided to  take 10 soldiers and place them at a convenient height, which was  done. On the way back, Karamian noticed another advantageous height  and again followed the men from the detachment, however, upon  returning, he learned that Vanetsyan was at the headquarters. Then  the head of the Rodina party left for Stepanakert. As the Deputy  Chairman of the Investigative Committee said, he later learned that  only 20 people from Vanetsyan's detachment remained at the positions  in Shushi, however, then they also left the city. Also, Kyaramyan did  not agree with the opinion that he is an anti- Russian political  figure, of which the second President of Armenia Robert Kocharian  accused him. According to the Deputy Chairman of the Investigative  Committee, on the second day of the war, he began to develop the  Armenian-Russian cooperation in the NSS. He complained that now many  politicians are accused of being anti-Russian. According to  Kyaramyan, this is an attempt to lower the rating of these political  figures. Kyaramyan also stressed that he did everything to develop  the Armenian-Russian relations and appreciates them very much.