Oppositionist: Traitor who surrendered Artsakh and betrayed Armenia  must be dismissed 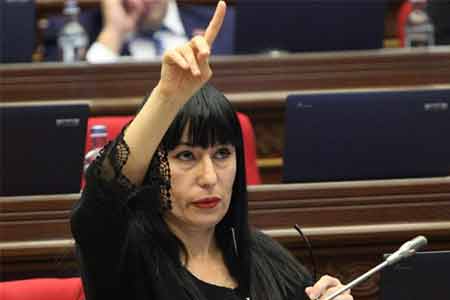 ArmInfo. The traitor who surrendered Artsakh and betrayed Armenia must be dismissed. Naira Zohrabyan, MP from the Prosperous Armenia opposition faction, said  this at an extraordinary sitting of the RA National Assembly on  December 28.

According to her, yesterday the interview to the Public Television,  the person holding the post of Prime Minister stated that the  surrender of some territories in Syunik is the result of oral  agreements within the framework of the tripartite statement of  November 9. "We do not yet know what other agreements the traitor has  reached with his friend Turk -" educated by Ilham Aliyev, "the MP  said, expressing confidence that there will be new revelations on  this issue in the near future.

The Armenian parliament, which, according to Zohrabyan, has several  weeks left, must discuss only one issue - the traitor who surrendered  Artsakh and part of the territory of Armenia must be dismissed and a  new head of government elected so that at least something can be  saved. "We can come to be seen as people who stopped the hand of   traitor Nikol Pashinyan," Naira Zohrabyan said.