Hovhannes Igityan: The world discusses our problems more than we  ourselves do 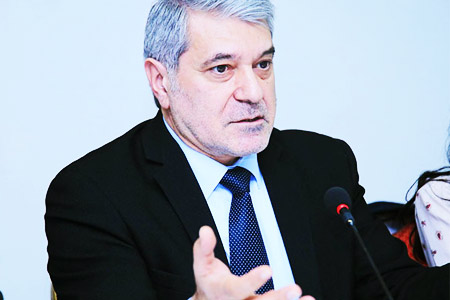 ArmInfo.The world today discusses our problems more than we ourselves do, which I consider as an abnormal, unacceptable situation. Deputy chairman of the  Parliamentary Standing Committee on Foreign Relations Hovhannes  Igityan expressed a similar opinion to ArmInfo.

"And this same world expects from us, from Armenia a clear position,  expects messages. And against this background, our opposition is  discussing and demanding only the resignation of the Prime Minister  of Armenia. We are wasting time, which we do not have much. And, in  this light, for me personally, the very fact of the persona of the  head of our state is no as important as our state diplomatic concept  in the issues of Armenia and Artsakh," he stressed.

Meanwhile, according to the parliamentarian, the participants of  "Motherland Rescue Movement",  who are protesting in the streets do  not answer the question of how the country can get out of the current  situation.

These ways should be discussed together. In this light, noting the  absence of any programs in this direction  on the street or other  platforms, Igityan stressed that he sees only slogans demanding the  resignation of the Prime Minister.

Commenting on the demands for Pashinyan's resignation, including from  the Diaspora, the parliamentarian noted the lack of consensus on this  issue. At the same time, he expressed confidence that the resignation  of the prime minister through the efforts of the Diaspora would not  bring one iota closer to the resolution of the problems that Artsakh  and Armenia are facing.

In this light, Igityan is convinced of the need to unite the efforts  of the Armenians of the world in order to solve these problems. In  his opinion, this process should take place on the basis of all  possible points of contact that unite the nation. "Meanwhile, it is  unambiguous that the slogan "Nikol leave!" is not such a point. It is  not an idea that unites the Armenians," he noted.

"And finally, the most important thing is that "Nikol leave!" will  not in any way form the concept of creating new security guarantees  for Armenia and Artsakh at international platforms and formats.   Therefore,  I suggest focusing on other things. For example, what  questions would we like to see in the resolution on the issue of  Armenia currently being discussed at the UN? I propose it because I  do not see any ideas in the Armenian political field that could  become part of this resolution, "Igityan concluded.