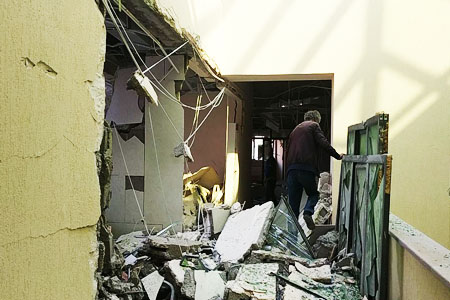 ArmInfo. President of the Artsakh Republic  Arayik Harutyunyan visited a number of building sites in the  capital today and gave new instructions on the timing of their  commissioning.

The President noted that the number one social problem in the  post-war period is housing construction, and in the coming years the  government will make every effort to provide housing for all citizens  who were made homeless.

According to plans, in the first half of next year, multi-storey  buildings with 300 apartments under construction in different parts  of Stepanakert will be commissioned. The project will also include  administrative buildings, which, as a result of reconstruction, will  be converted into residential buildings.

The President also visited the Artsakhkat (Artsakhmilk) CJSC, got  acquainted with the working conditions, thanked the staff for the  fact that during the difficult period of the war, production was not  stopped and the population was provided with fresh dairy products.

During the visits, Arayik Harutyunyan was accompanied by  Chairman of  the Executive Board of "ARMBUSINESSBANK" CJSC Arsen Mikayelyan and  Minister of Urban Development of the Republic of Artsakh Aram  Sargsyan.