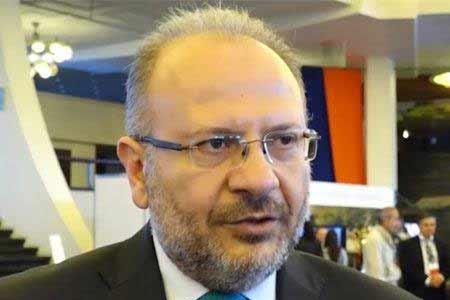 ArmInfo.The National Security Service of Armenia is trying to ascribe to the opposition forces participation in the events of November 9-10. On December 3,  the representative of the ARFD party Bagrat Yesayan told reporters  about this, who had just left the building of the National Security  Service, where he was invited to testify on the fact of the pogroms  in the buildings of the government and parliament after reports of  the signing of a trilateral statement on Karabakh.

According to Bagrat Yesayan, the NSS is trying to put pressure on  active political figures, to which he attributed himself. Various  accusations are heard, and the opposition representative is surprised  by such unprofessional actions of the NSS. However, as Yesanyan  noted, over the past 2.5 years, the NSS has been doing everything,  anything, but not its direct responsibilities. In particular, on  behalf of the person holding the post of prime minister, law  enforcement agencies are looking for Satan, control the wearing of  masks, the presence of cash registers at gas stations, meanwhile, the  country faced a large-scale war that led to defeat. And one of the  reasons for this is the lack of professionalism among the NSS staff,  and this is the task of the current authorities so that the NSS does  everything it wants, except for fulfilling its mission.  Yesterday's  report by the NSS is nothing more than a criminal case, since it  contains elements of abuse of power and abuse of office. I intend to  submit a statement to the Attorney General with a request to initiate  a criminal case. Moreover, if no accusations are presented to me,  especially after the publication of my photo, I will demand from the  director of the NSS to initiate an official investigation for the  purpose of identifying the person who prepared and disseminated this  message, "the oppositionist said. He added that he intends to appeal  to the Ombudsman because human rights are obviously violated, as well  as to the court in order to protect his honor and dignity.