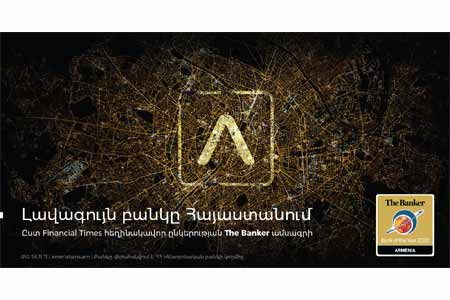 ArmInfo.The Banker magazine, the world's leading financial publication and part of the Financial Times, named Ameriabank the Bank of the Year in Armenia at its 21st  Annual Awards in London.

At the awards ceremony held on December 3 in London, the organizers  of the competition noted: "Ameriabank was recognized as the winner  for tangible progress, serious achievements and innovative approaches  in a number of areas. Our team conducted research among banks for  several months, focusing on key performance indicators, development  strategies and improvement of customer service. The title of "Best  Bank of Armenia" was awarded to Ameriabank for sustainable growth,  serious steps in the field of digitization of services, introduction  of new and modern banking instruments. "

The Banker Award is the global benchmark for assessing the  development of banking and is presented for the 21st consecutive  year. This year's awards were given to leading banks from over 100  countries. The Bank of the Year 2020 awards went to such banks as  Commerzbank (Germany), VTB Bank (Russia), China Merchants Bank (CMB,  China), Lloyds Banking Group (Great Britain) and other reputable  financial institutions.

The Banker magazine also emphasized that this year Ameriabank  provided significant assistance to small and medium-sized enterprises  in Armenia. The importance of the process of providing online loans  by the bank, which enables small and medium-sized enterprises through  a scoring system to submit an online application and receive a  response to a loan in a matter of minutes, was especially noted.   Ameriabank's online mortgage and car loan platforms are also  recognized as innovative solutions aimed at customer comfort and  efficient implementation of business goals.

Ameriabank became the clear winner in the "Best Bank of Armenia"  nomination due to strong growth in the reporting year 2019, as well  as its commitment to launching digital services for its clients. The  bank achieved positive results in most of the key indicators: net  profit for the year increased by 15.4%, while total assets and Tier 1  capital grew by 24.2% and 5.9%, respectively. The bank's return on  total capital remained stable at 12.8%.  Committed to serving small  and medium-sized enterprises (SMEs) in the country, as well as the  ongoing digitalization of its products and services, Ameriabank  launched online loan applications and authorizations for this  business segment in 2019. As part of the first stage of this  strategy, Ameriabank allowed issuing loans to SMEs only online in the  amount of up to AMD 10 million ($ 20.2 thousand). By the end of 2019,  as part of the second phase of this strategy, the bank expanded its  credit limit and, using a more advanced scoring module, provided  customers with an opportunity to receive a response in a matter of  minutes. The bank has achieved this with the help of artificial  intelligence tools.

In addition, Ameriabank launched online applications for mortgage and  car loans, and the introduction of electronic signatures for  individual clients reduced the cost of opening new accounts by about  40%. The agreement reached between the messaging app Zangi and  Ameriabank also allows customers to communicate with the bank free of  charge from anywhere in the world, regardless of the mobile operator  they use.

To note, Ameriabank CJSC is a universal bank providing investment,  corporate and retail banking services in the form of a comprehensive  package of banking solutions. The bank has been operating in the  Armenian market since October 31, 1996. The branch network of  Ameriabank currently has 19 subdivisions: 11 - in the capital and 8 -  in the regional. The bank's shareholders as of October 1, 2020 are  Imast Group (CY) Limited (previous name - Ameria Group (C-Y) Limited  - 48.95%, EBRD - 17.76%, Asian Development Bank - 13.94%, ESPS  Holding Limited - 11.83% and Afeyan Foundation for Armenia Inc. -  7.52%.