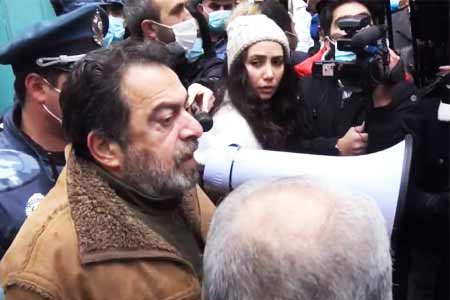 ArmInfo.Representatives of the creative intelligentsia today held a regular march to the embassies of the OSCE Minsk Group member states in support of the parents of  the missing and captured servicemen. Today the march moved toward the  US Embassy in Armenia.

Yesterday, representatives of the creative intelligentsia organized a  march to the French Embassy in Armenia, and on Sunday to the Russian  Embassy.

Actor Hrant Tokhatyan said that he had met with the Russian consul in  Armenia, who said that he would try to organize a meeting with the  ambassador in the near future. Tokhatyan said he hopes for the  assistance of the ambassadors of the OSCE Minsk Group co-chairing  countries. "We will give the letter to the representative of the US  Embassy in Armenia, earlier the letters were giwen to the  representatives of the embassies of France and Russia," he said.

In the letters, the protesters note that a lot of time has passed  since the signing of the trilateral agreement, however, there are  prisoners of war in Azerbaijan to this day. They ask the ambassadors  to convey the request of the Armenian intelligentsia to the  leadership of these countries, to support the return of the Armenian  prisoners of war to Armenia. "Everything concerning the return of  territories is being carried out with amazing speed and accuracy.  However, there is no news about our prisoners of war. Such a  situation is unacceptable," Tokhatyan said. Therefore,  representatives of the intelligentsia decided to raise this issue  before representatives of the embassies of the Minsk Group  co-chairing countries. Tokhatyan noted that this action cannot be  politicized, since the only goal of the rally participants is to  return home the Armenian prisoners of war as soon as possible.

Tokhatyan met with representatives of the US Embassy and handed them  a letter. He said that the letter letter will be transmitted to  US  Ambassador to Armenia Lynne Tracy. "After the letter is handed over  to the US Ambassador and she gets acquainted with it, we will be  given an answer. We hope to meet with all the ambassadors of the OSCE  Minsk Group co-chair countries," the actor concluded.

To note, the representatives of the creative intelligentsia of  Armenia held a protest action on the Charles Aznavour Square last  Saturday. Producer Armen Grigoryan noted at the rally, that he  proposes to hold a procession similar to the " Memorial March ",  urging to take with you photographs of all servicemen who disappeared  and who were captured, and walk through all the embassies in Armenia,  presenting them the current situation.