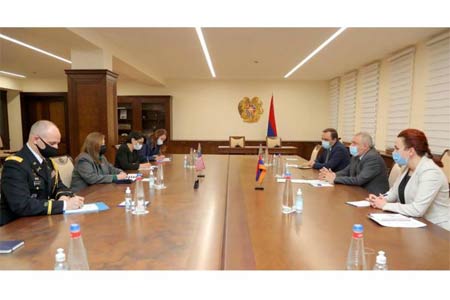 ArmInfo.Armenian Defense Minister Vagharshak Harutyunyan, at a meeting with US Ambassador to Armenia Lynn Tracy, presented the progress in implementing the  agreements reached after the cessation of hostilities in the zone of  the Nagorno-Karabakh conflict.

As the press service of the RA  Defense Ministry told ArmInfo, the priority was given to the issues  of returning prisoners, searching for the missing, exchanging bodies  of the dead, intensive work with the ICRC, the RF Defense Ministry  and the command of the Russian peacekeeping contingent located in  Artsakh.

Harutyunyan also said that an analysis of military actions and an  assessment of omissions are being carried out, which can lead to both  structural changes, changes in decision-making procedures, tactics,  and legislative amendments. During the meeting, the sides also  discussed the possibility of giving a new impetus to the  Armenian-American cooperation in the field of defense. The  interlocutors agreed that as a result of additional discussions, new  areas of cooperation would be initiated and areas based on the  priority interests of the parties would be established.