Akar: Dialogue with the Russian Federation on the technical aspects  of the Monitoring Center on Karabakh continues 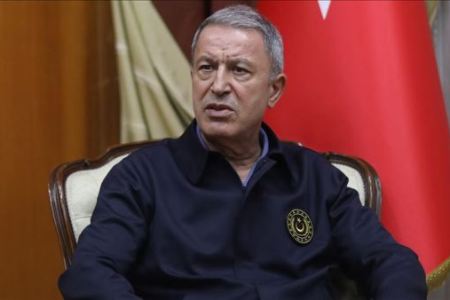 ArmInfo.The dialogue with the RF on the technical aspects of the Monitoring Center for Karabakh continues in accordance with the schedule. This was announced by the  Minister of National Defense of Turkey Hulusi Akar at a meeting with  the commanders of the branches of the Turkish Armed Forces in the  videoconference mode.

Akar recalled that following the trilateral statements on Karabakh, a  memorandum was signed between the heads of the defense departments of  Turkey and the Russian Federation on the creation of a Monitoring  Center in Azerbaijan, Anadolu reports.

On November 9, the Presidents of the Russian Federation and  Azerbaijan Vladimir Putin and Ilham Aliyev, as well as the Prime  Minister of Armenia Nikol Pashinyan, signed a joint statement on the  complete cessation of hostilities in Nagorno-Karabakh.

The Russian leader, in particular, said that the Azerbaijani and  Armenian sides will remain in their occupied positions, and  peacekeepers from the Russian Federation will be deployed in the  region. An agreement was also reached to establish a joint  Russian-Turkish ceasefire control center, which will be located on  the territory of Azerbaijan. On November 17, the Turkish parliament  approved a presidential decree providing for the sending of troops to  Azerbaijan for a period of one year.