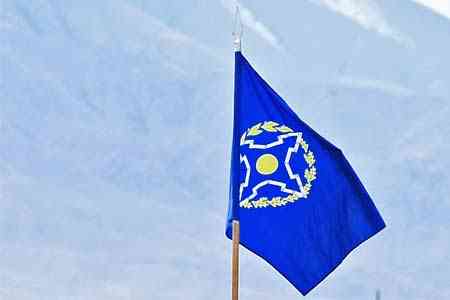 ArmInfo.The Council of Defense Ministers and Foreign Ministers of the CSTO will discuss on Tuesday a draft protocol on amending the main agreement on the  peacekeeping activities of the CSTO. This was stated by Secretary  General of the organization Stanislav Zas on Monday during a meeting  of the Parliamentary Assembly of the Collective Security Treaty  Organization (PA CSTO).

"Tomorrow, for consideration by the Council of Defense Ministers and  the Council of Foreign Ministers of the CSTO, a draft, prepared on  the UN legal basis, a protocol on amending our basic agreement on the  CSTO peacekeeping activities will be submitted for approval. It  provides for the participation of the CSTO collective peacekeeping  forces in UN peacekeeping operations through an agreement with the  coordinating state, as which the Collective Security Council  determines one of the CSTO member states," Zas said, RIA Novosti  reported. The CSTO Secretary General noted that after signing the  document should be ratified in the parliaments of the organization's  member states.

On December 1 of this year a meeting of the Council of Foreign  Ministers of the Collective Security Treaty Organization will be held  under the chairmanship of Minister of Foreign Affairs of the Russian  Federation Sergey Lavrov in the format of a video conference. CSTO  Secretary General Stanislav Zas will take part in the meeting via  video link.  The agenda of the meeting includes the state and  prospects for the development of global and regional security, as  well as key aspects of the Organization's activities. The results of  the chairmanship of the Russian Federation in the Organization, which  will pass to the Republic of Tajikistan, will be summed up.   Particular attention will be paid to the interaction of the CSTO with  the UN with an emphasis on peacekeeping issues.