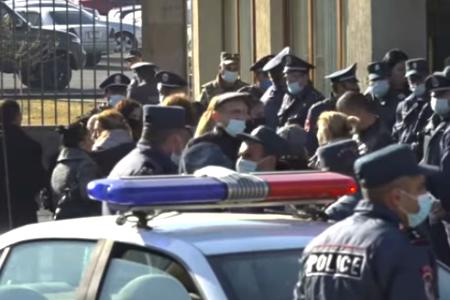 ArmInfo.Relatives and parents of conscript servicemen serving in Artsakh held another  protest action in front of the Armenian government.

They demanded that their sons be returned to Armenia and given leave.  The parents indicated that their children who took part in the  hostilities are now in a difficult moral and psychological state and  they need time to recover. Many of the parents are also convinced  that those conscript soldiers who took part in the hostilities should  reduce their service life, and those who have a month left before  completing their service should be demobilized ahead of schedule.

Relatives and friends of the servicemen also insist on providing  servicemen with the necessary medical assistance, which, they claim,  their children are deprived of.  Today the parents went home, but  promised to meet again tomorrow, but this time in front of the RA  Ministry of Defense. They also held a meeting with the Ombudsman of  Armenia and presented him with a list of issues of concern to them.   To recall, the parents of military servicemen serving in Artsakh, as  well as those of the missing, have been holding protest actions in  front of the government and the Ministry of Defense for the second  week. They were received several times by RA Prime Minister Nikol  Pashinyan, however, they did not receive answers to their questions.