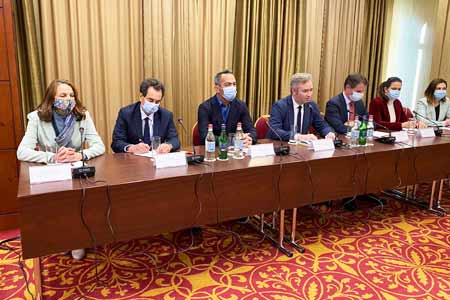 ArmInfo.France will provide Armenia with long-term assistance in overcoming the  consequences of the current situation in the country. Jean-Baptiste  Lemoyne, Secretary of State to the Minister for Europe and Foreign  Affairs of France, who accompanied the second plane of the French  humanitarian aid to Armenia, stated this on November 28 during a  briefing in Yerevan.

He informed that French President Emmanuel Macron instructed in a  short time to organize humanitarian aid to people affected by the  hostilities in the Nagorno-Karabakh conflict zone, and who have been  in shock for several weeks and faced a number of problems.  "The  President also wished the assistance to be long-term. Armenia and  France are linked by exceptional relations with strong historical  roots," Lemoyne said, adding that in recent weeks Macron had  repeatedly held telephone talks with Armenian Prime Minister Nikol  Pashinyan, moreover, maintained contacts with the presidents of  Azerbaijan and Russia, as well as other members of the OSCE Minsk  Group.

The French diplomat added that many issues were discussed, including  those related to ensuring the preservation of cultural, historical  and religious heritage. The Secretary of State said that there is  interaction with UNESCO and other organizations to ensure their  protection.

He informed that within the framework of the visit he had already  held negotiations with the heads of the RA Foreign Ministry and  Government, at which the agreement of November 9 was also discussed.

"We brought with us 25 tons of humanitarian aid, which was mobilized  by the state, associations of solidarity with Armenia, humanitarian  organizations united under the <Coordination Sud> and the Aznavour  Foundation. Famous football player Youri Djorkaeff  headed this  humanitarian aid," Lemoyne said.

At the same time, he noted that this general mobilization in  rendering assistance to Armenia reminded him of December 1988, when  the famous chansonnier Charles Aznavour rallied everyone to provide  assistance to Armenia to the Pour toi Armenie song (For You  Armenia"), which was seriously affected by the earthquake.

"What is happening today is reminiscent of this earthquake. But, at  the same time, it also suggests that trees bloom after the disaster,"  Lemoyne summed up.

In turn, the Ambassador of France to Armenia Jonathan Lacote noted  that this is fourth visit of Mr. Lemoyne   to Armenia. "It is a great  honor for us to feel that you are near and we can carry out our work  under the leadership of the president. Lemoyne  was last in Yerevan  in 2018 - it was a happy year for Armenia. And now he is here when  Armenia is having hard times,> the diplomat said.