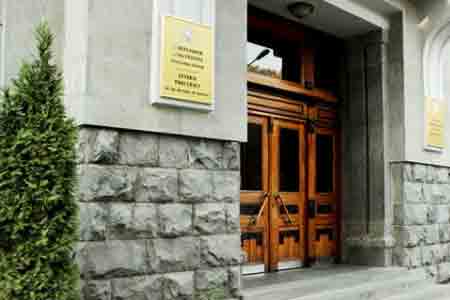 ArmInfo.The General Prosecutor's Office of Armenia is taking actions to prevent  Azerbaijan from placing on the international wanted list former and  current officials of Armenia and Artsakh.

As reported by the press service of the Prosecutor General's Office,  information has recently appeared in the media that Azerbaijan has  put on the international wanted list of former Minister of Defense of  Armenia Seyran Ohanyan, RA MP  Arman Babajanyan, President of Artsakh  Arayik Harutyunyan, adviser to President of Artsakh David Babayan,  former Minister of Defense of Artsakh Jalal Harutyunyan.  Considering  the fact that the persecution of these persons is in no way  justified, and is a continuation of hostilities and national hatred,  the Prosecutor General's Office of Armenia is taking active steps to  neutralize this illegal search.

The Prosecutor General's Office appealed to Interpol with the aim of  informing about the illegal actions of Azerbaijan, carried out during  the unleashed aggressive war against Artsakh and Armenia. And also  about the war crimes committed by Azerbaijan against the civilian  population.

The Prosecutor General's Office is taking steps to prevent this  search through the Interpol General Secretariat. According to the  Interpol Rules, organizations are strictly prohibited from  interfering in matters of a political, military, racial or religious  nature. In 2017, Armenia's cooperation with Interpol already had a  positive result, Interpol refused to put Azerbaijan on the wanted  list for those who visited Artsakh.