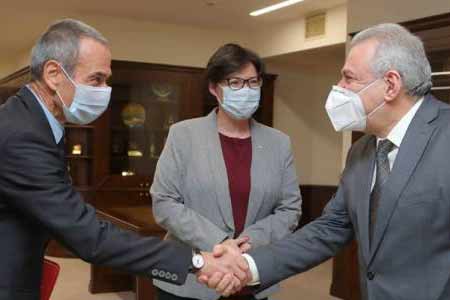 ArmInfo.RA Defense Minister Vagharshak Harutyunyan met with  newly appointed head of the delegation of the International Committee of the Red Cross in Armenia  Thierry Ribot  and Claire Meytraud, who is completing her mission.  The press service of the Defense Ministry reports.

The Minister of Defense noted that the Armenian side attaches great  importance to the mediation of the delegation of the Russian  peacekeeping contingent and the International Committee of the Red  Cross in the search for the bodies of servicemen who died during the  hostilities on the line of contact between Artsakh and Azerbaijan,  missing persons and wounded. Harutyunyan once again emphasized the  assistance provided by the representatives of the ICRC delegation  during the search for missing servicemen and civilians in the  southern and southeastern parts of the Artsakh-Azerbaijani front,  carried out with the mediation of Russian peacekeepers.

In turn, the head of the Yerevan office of the ICRC assured that the  delegation, within the framework of its powers, will continue to  fulfill the mediating mission in the direction of organizing the  mentioned process.  Vagharshak Harutyunyan highly appreciated the  activities of Mrs. Meytraud during her tenure and wished the newly  appointed head of the delegation Thierry Ribot  fruitful work.