Zakharova: Military specialists are dealing with the issue of the  presence of militants in the Karabakh conflict zone 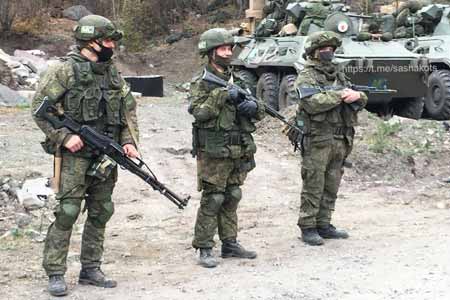 ArmInfo.The corresponding military specialists are dealing with the issue of the presence of militants in the zone of the Nagorno-Karabakh conflict.  Official  representative of the Russian Foreign Ministry Maria Zakharova  announced this on November 27 during a weekly briefing.

"This work does not imply public commenting on their every step, but  I can assure you that it is being carried out. It is being conducted,  of course, with the parties to the conflict, and in principle, with  those experts who have either the data or the ability to participate  in resolving this issue. It may be a very complicated formulation,  but it speaks about the main thing - the work is underway and the  issue is under constant control of our military," the official  representative of the Russian Foreign Ministry said.

At the same time, referring to the statements of the President of the  Russian Federation about informal armed formations, Zakharova during  her communication with the media on November 17, recalled that Putin  used this term in relation to the persons transferred by Turkey to  the zone of the Nagorno-Karabakh armed conflict. "That is, we were  talking about such armed formations, the status and functioning of  which does not correspond to the formal requirements of the law. As  for the international legal qualification of this situation, it is  known that during the above-mentioned armed conflict, the norms of  Additional Protocol 1 to the Geneva Conventions of 1977 are applied.

In particular, in the context of this conflict, redeployed fighters  fall under the category of mercenaries, as the redeployed persons  have been recruited abroad to fight in an armed conflict. In fact,  they took a direct part in hostilities, took part in hostilities for  personal gain - high material rewards, "Zakharova said, adding that  according to data from open sources, the amount of this remuneration  was up to 2 thousand dollars per month. She also stated that they  were not part of the personnel of any party to the armed conflict;  were not citizens of a party to the conflict; not permanently  resident in territory controlled by a party to the conflict; were not  sent by a state that is not a party to the conflict for performing  official duties as a member of the Armed Forces.  "Since mercenary  formations cannot be considered legal participants in an armed  conflict, the Russian president quite reasonably used the  characterization of informal armed formations. It indicates their  status as not meeting the formal requirements of international law,"  Zakharova said.

She also did not comment on the issue of vandalism practiced by the  Azerbaijani Armed Forces against memorial plaques in the territory of  the Armenian cemetery.

It should be noted that after Azerbaijan's large-scale military  aggression against Artsakh, a number of media outlets wrote about  hundreds of Syrian militants associated with Turkey deployed to  Karabakh and about the readiness to send "hundreds more" of militias  to the Karabakh conflict zone.

Syrian leader Bashar al-Assad said that mercenaries from Syria are  being deployed to Karabakh, and Turkey is using terrorists from Syria  and other countries in Nagorno-Karabakh.

In turn, director of the Russian Foreign Intelligence Service, Sergey  Naryshkin, also reported that, according to the information available  to the Service, mercenaries from international terrorist  organizations fighting in the Middle East are actively pulling into  the conflict zone, and we are talking about hundreds and even  thousands of radicals.

French President Emmanuel Macron also spoke about the transfer of 300  Syrian militants across Turkey to Baku in early October. The leaders  of Azerbaijan and Turkey, despite providing numerous factual evidence  of their involvement in the hostilities, denied their involvement.

The Russian Foreign Minister noted that the number of militants  participating in the conflict is in the thousands.