Nikol Pashinyan: Anna Hakobyan`s visit to Artsakh was turned into a  subject of political speculation 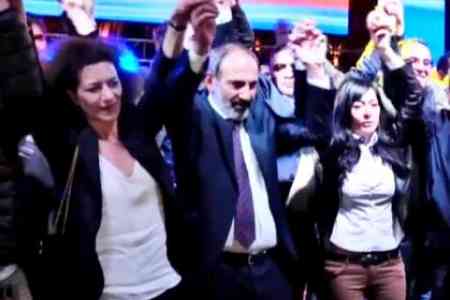 ArmInfo. Recently, accusations  have often appeared that the pro- government media and the country's  leadership did not tell citizens about what was really happening at  the front. Armenian Prime Minister Nikol Pashinyan stated this during  a video message.

He noticed that in reality the situation was different. "Yes,  sometimes I didn't say everything to the end, so that the enemies  would not use this information for their own purposes, so that they  would not feel the advantage. But we reported that there are battles  in Hadrut, Shushi, Karintak. We also reported on the achievements of  our servicemen, but this is true, we must know about the victories of  our soldiers," the prime minister stressed.

Pashinyan noted that the enemy failed to advance in the Northern  direction, in Mataghis, from Sotk to Aterk, despite the fact that in  the first days of the war there were positional losses, but then the  front line was retained.

"Our servicemen performed a real feat. They kept the front line. And  in order to save their lives so that they would not be surrounded, I  signed a tripartite agreement. The 9th Defense Corps also fought  heroically. But the defense was broken, which led to disastrous  consequences. And the general, who led the corps and shares  responsibility for everything that happened, now gives press  conferences and presents sensational "revelations", " the prime  minister stressed.

Pashinyan noted that during his leadership in the Ministry of  Defense, this general wasted an amount of $ 42,000,000, bought  worthless weapons, and a criminal case was opened in the Armenian  National Security Service on this fact.

The Prime Minister stressed that his wife, Anna Hakobyan, also became  a target of accusation. "You forget to say that part of the  population of Stepanakert left their homes. Someone thinks that this  city, which is under the bombing, hardly resembles a sanatorium in  Baden-Baden. Anna Hakobyan was there so that people would not  despair, as there was chaos and regular reports were received that  people were leaving their homes. A representative of the Prime  Minister's family was there so that there was no panic, and some of  the servicemen, who were just spreading panic, were recalled to  Armenia.  On behalf of the Prime Minister, my wife visited the  command post to provide moral assistance to the representatives of  the Defense Army. You cannot turn her visit into a command post into  an object of political speculation," Pashinyan said.

The head of the Cabinet also assured that during the war, only  truthful and reliable information was provided to the citizens of the  country.