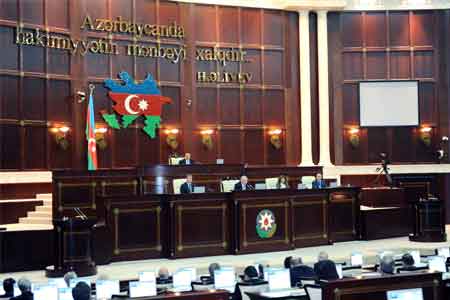 ArmInfo. The Milli Majlis  of Azerbaijan voiced a protest to the French Senate over the  resolution on Nagorno-Karabakh adopted yesterday and called on the  country's government to reconsider political and economic relations  with Paris.

According to the Azerbaijani media, the Azerbaijani parliament also  suggested that the government apply to the Organization for Security  and Cooperation in Europe to recall France from among the co-chairs  of the OSCE Minsk Group.

To note, yesterday, the French Senate, with 305 votes "for" and one  against, adopted a resolution on the need to recognize the  independence of Nagorno Karabakh, which was represented by 5  political factions.

The resolution, among other provisions, suggests the French  government to recognize the Nagorno- Karabakh Republic; condemns the  aggression of Azerbaijan against Artsakh with the participation of  Turkey and foreign mercenaries, demanding the withdrawal of troops  from the territories seized after September 27; also requires the  government to make every effort to restore the negotiation process  within the framework of the OSCE Minsk Group, which will restore the  borders from 1994, which in turn will ensure the safety of the  Armenian population and the return of internally displaced persons,  as well as protect the Armenian cultural and religious heritage.   Pointing in the resolution to the Armenian pogroms in Baku, Sumgait,  Kirovabad and Maragha, and referring to the reports of the Commission  on Racism and Intolerance of the Council of Europe and the UN  Committee on the Elimination of Racial Discrimination (CERD)on  Azerbaijan, it was pointed out that it is impossible for the Armenian  population to live in Azerbaijan.

Baku criticized this resolution, calling the document a piece of  paper. And the Turkish Foreign Ministry called the decision of the  French parliamentarians another "indicator of ignoring the elementary  norms of international law and the principles of justice for the sake  of domestic political interests."