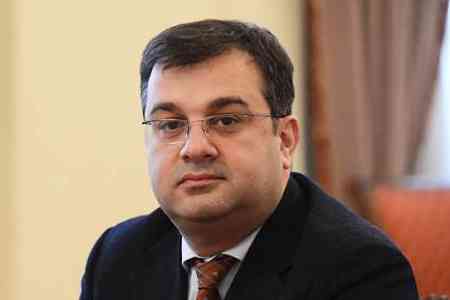 As the press service of the RA MFA told ArmInfo, Apitonyan touched  upon the challenges the world faced against the background of the  Covid-19 epidemic, as well as its impact on such spheres as  healthcare, economy, social sphere and education.

He also presented a resolution proposed by Armenia as the country  chairing the Francophonie summit entitled "Living Together in the  Covid-19 Pandemic and Post-Coronavirus World."

Apitonyan also spoke about the military aggression unleashed by  Azerbaijan on September 27 with the support of Turkey, despite the UN  Secretary General's call for peace and security during the epidemic.  The Deputy Foreign Minister reported on the large number of victims,  thousands of refugees, the destruction of the civil infrastructure in  Artsakh, the dangers threatening the Armenian cultural heritage,  violations of international humanitarian law and war crimes committed  by Azerbaijan.

It was noted that the trilateral statement signed on November 9 was  intended, first of all, to stop hostilities, to ensure the  implementation of security measures, and it was emphasized that  during the ongoing negotiations within the framework of the OSCE  Minsk Group co-chairs the issue of the future status of Artsakh with  respect for the right of the people of Artsakh to self-determination.

During the online session, issues related to the fight against  terrorism were also raised, in particular, the participation of  Syrian mercenary terrorists from Turkey in the unleashed aggression  against Artsakh.