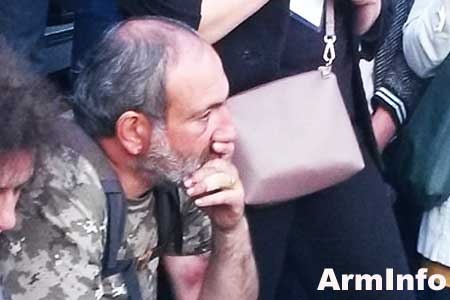 ArmInfo.More than 20 Armenian diaspora structures demand the resignation of the Prime Minister of Armenia Nikol Pashinyan.

The message received by ArmInfo notes that the notorious document on  the surrender on Nagorno- Karabakh, signed by Pashinyan on November  9, caused a wave of protests in the Diaspora.

These organizations consider the RA Prime Minister and his team  responsible for the current situation, anti- national anti-state  provisions stipulated by the signed document, internal disunity and  violence against the opposition.

As a way out of this situation, these structures expressed solidarity  with the Supreme Council of the ARF Dashnaktsutyun and 16 partner  parties on the issue of holding protests and implementing the  proposed roadmap, "the statement says.

Note that since November 10, the opposition has been periodically  holding protests demanding the resignation of RA Prime Minister Nikol  Pashinyan, who signed the shameful act of surrender, according to  which the Azerbaijani Armed Forces withdraw 7 regions around  Nagorno-Karabakh, Shushi and part of the Hadrud region. Later it  became known that more than 121 communities of the NKR crossed over  to the enemy. Russian peacekeepers have been brought into the region  to ensure the safety of the civilian population and guard the Lachin  corridor, the only ground communication linking Artsakh with Armenia.   With this document, Azerbaijan also received the right to establish  land communication with Nakhichevan through the territory of the  Republic of Armenia. Meanwhile, this agreement does not even define  the status of Artsakh.

In connection with the signing of this sad document, the opposition  demands the resignation of Pashinyan and the formation of a  government of national accord, which will have to look for a way out  of the current situation and mitigate the consequences of this  document.

It is noteworthy that the RA Prime Minister himself, believes that he  saved the Armenian people from the catastrophe and does not see his  fault in this, and not only is not going to resign, but also  presented a plan for the further development of Armenia. Moreover, he  stated that the Armenian society did not support the protests and  calls of the opposition to change power in the country after the  joint statement by the leaders of Russia, Azerbaijan and Armenia on  the cessation of hostilities in the zone of the Nagorno-Karabakh  conflict. Pashinyan believes that the Armenian society agrees that in  the situation when this document was signed, there was no real  alternative that would be better for us. That is, in my opinion, it  is precisely this understanding of the signed document in the  Armenian society.