More than 2.3 thousand refugees returned to Nagorno-Karabakh in a day 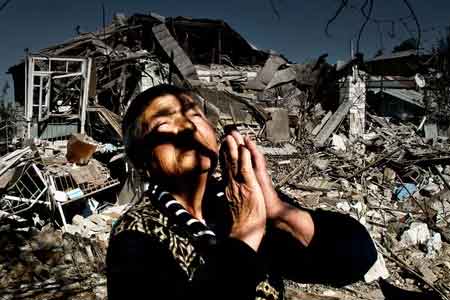 ArmInfo.Over 2.3 thousand refugees returned from Armenia to their homes in Nagorny Karabakh. in a day.  Major General Igor Konashenkov, an official representative of  the Russian Ministry of Defense, told reporters during a briefing on  November 23, TASS reports.

"During the day, 2,334 refugees returned to Nagorno-Karabakh from the  territory of Armenia, who had previously left their homes in  Nagorno-Karabakh because of the hostilities," Konashenkov said.

According to a representative of the military department, since  November 14, more than 11 thousand residents of Nagorno-Karabakh have  returned to their former residences with the assistance of Russian  peacekeepers. With the coordination of the Russian peacekeepers and  the International Committee of the Red Cross, the exchange of bodies  of the dead persons also continues.

On Sunday, the Russian Defense Ministry announced the return of 1.4  thousand people to Stepanakert, accompanied by Russian peacekeepers.  1.1 thousand people returned on Saturday.

On November 9, Russian President Vladimir Putin, Azerbaijani  President Ilham Aliyev and Armenian Prime Minister Nikol Pashinyan  signed a joint statement on the complete cessation of hostilities in  Nagorno-Karabakh. According to the Russian leader, the Azerbaijani  and Armenian sides stop at their taken positions, while Russian  peacekeepers are deployed in the region. According to the Ministry of  Defense of the Russian Federation, the bulk of the contingent was  made up of units of the 15th separate motorized rifle brigade  (peacekeeping) of the Central Military District. Russian observation  posts are set up along the contact line in Nagorno-Karabakh and along  the Lachin corridor connecting Armenia and Nagorno-Karabakh. The  command of the peacekeeping operation is located in Stepanakert. The  situation is monitored around the clock.