German Ambassador: Comprehensive and sustainable settlement of the  Karabakh conflict is still pending 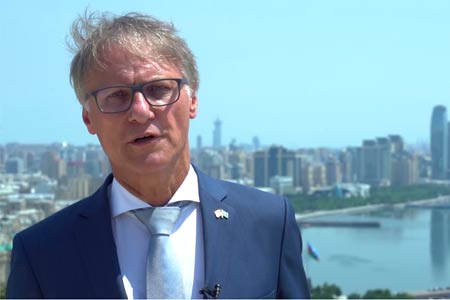 ArmInfo.In my opinion, the Minsk Group did not fail, it is just that if the parties refuse  serious negotiations, then you cannot bring two enemies at one table.  German Ambassador to Azerbaijan Wolfgang Manig stated this in an  interview with APA.

He stated that the Minsk Group was created as a  structure for mediation in negotiations between Armenia and  Azerbaijan, however, in the first years, both sides could not or did  not want to use the efforts of this body. According to the  ambassador, it was expected that the three co-chairs, each of whom is  a permanent member of the UN Security Council, would be able to bring  the parties to the negotiating table, but, unfortunately, the parties  continued to refuse.

"As for the negotiations, the situation is different today. Since the  tripartite statement of November 9 does not touch on the details of  relations between Azerbaijan and Armenia, or the rights and  obligations of Azerbaijanis or Armenians living in the conflict  region, a comprehensive and sustainable settlement of the conflict is  still pending. The mandate of the Minsk Group envisages  simplification of such regulation, therefore it has not been  completed yet. Thus, the Minsk Group co-chairs will continue their  work, "Manig said.

Clarifying how Germany, as a permanent member of the OSCE Minsk  Group, can contribute to the effectiveness of this format, the  diplomat expressed his conviction that, through the Eastern  Partnership program, the EU will be able to contribute to close  cooperation with the countries of the Program and the EU.

"The EU example shows how defining common interests and close  cooperation can reconcile former enemies. I believe that Germany and  other EU member states represented in the Minsk Group can provide  support to the co-chairs with the program and projects developed in  the EU for the development of a prosperous South Caucasus, "the  German ambassador said.

"The EU, Germany and others supported the ICRC in the implementation  of the humanitarian aspects of the trilateral statement. Along with  this, I understand the desire of the other two co-chairs of the OSCE  Minsk Group to study the details of the trilateral statement reached  in Moscow. I am sure that Azerbaijan, as a reliable partner of the  Eastern Partnership, will cooperate with the EU and its member states  in discussing the format of future relations in the South Caucasus,  "the ambassador summed up.