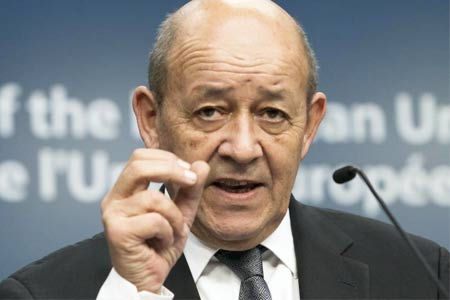 ArmInfo.French Foreign Minister Jean-Yves Le Drian stressed the great responsibility that the Minsk Group countries bear in the settlement of the conflict in  Nagorno-Karabakh.

He stated this the day before during an interview  with the French news channel LSL.  France, Russia and the United  States have a special responsibility. Because it was them who were  instructed by the UN to monitor compliance with the obligations  assumed by the parties to the conflict. As co-chairs of the Minsk  Group, we have made a lot of efforts to achieve a ceasefire. Three  times in one week, initiatives were taken to achieve a cessation of  hostilities, in particular, by my Russian counterpart Sergei Lavrov  and by the United States, Michael Pompeo, but at that moment it did  not work, "Le Drian said.

"We bear the responsibility that the international community has  entrusted to us. And Armenia itself wants us to keep this  responsibility for ourselves. All this requires us to adhere to a  balanced position," he said.  "Both the Armenian and Azerbaijani  leadership stressed the importance of preserving our role. But this  does not prevent France from providing assistance to Armenia now - an  airplane with humanitarian supplies arrives in Yerevan, another one  will leave there next week," the minister said. During the interview,  he especially stressed that "Armenia is a friendly people for France.   "However, it should be admitted that there is uncertainty regarding  the ceasefire reached - and we want the necessary clarifications to  be made to us in this regard. They concern displaced persons, since  there are many Armenians in Nagorno-Karabakh, and we strive to ensure  that those Armenians, who were driven from their places of residence,  returned there, "the French minister said. It is also "the question  of mercenaries - their withdrawal should be achieved, and all three  countries - the co-chair of the Minsk Group agree with the necessity  of this," he continued. "And it is also a question of protecting  religious and cultural heritage. In this regard, French President  Emmanuel Macron took initiatives jointly with UNESCO, which I  discussed on Saturday with my colleagues from Armenia and  Azerbaijan," Le Drian said.  "Only after the settlement of these  problems can we move on to the issue of the status of Nagorno-  Karabakh. At the moment it is not possible to discuss this. And the  Armenian leadership agrees with this," Le Drian said.  The French  Foreign Minister said that the topic of Nagorno-Karabakh was  discussed by him during the recent visit of US Secretary of State  Michael Pompeo to Paris, while the parties "agreed on the analysis of  the situation."