Sarkissian to Lavrov: You have visited Armenia in a very difficult,  one might say, crisis period 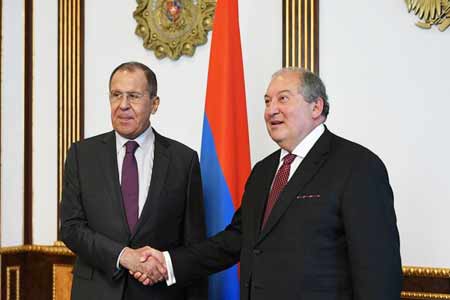 ArmInfo.  You have visited  Armenia in a very difficult, one might say, crisis period. Armenian  President Armen Sarkissian said this at a meeting with Russian  Foreign Minister Sergey Lavrov.  As reported by the press service of  the head of state, Sarkissian stated that in the old days there are  serious problems in the economic sector, a difficult post-war  situation has developed, problems, including psychological ones.  According to him, on top of everything else, there are problems  caused by the coronavirus. Sarkissian spoke about difficulties in  general and in foreign policy.

At the same time, the President thanked the Minister of Foreign  Affairs of Russia, first of all, for everything that he has done for  Armenia and the region over all these years and asked to convey to  the President of the Russian Federation the gratitude of the Armenian  people, especially for their support in these difficult days.

"It doesn't matter where the Armenians live, they know that if it  were not for your efforts and Vladimir Vladimirovich, we would  continue to lose young lives today. In the first days of the war, we  knew that all the efforts of the leadership of the Russian  Federation, the president personally, were aimed at cessation of  hostilities. We are convinced once again that real friendship  manifests itself in difficult times, "Sarkissian said, pointing out  that there are two problems that need to be addressed immediately and  consistently so that they do not grow.

According to the RA President, the most important thing is the  cessation of hostilities, which should continue in the coming years.  "This is very important for Armenia, it is vitally important. And the  second question that worries me very much is related to stability in  our country. Despite the difficulties, the crisis situation,  solutions can always be found. Our children, relatives and enemies  will be watching how Armenia gets out of this situation and if it  comes out with dignity, united, then we can say that we are a strong  nation, "Sparkisian said.

In turn, Lavrov said that the talks held in Yerevan allow considering  the entire spectrum of Armenian- Russian relations and agreeing on  those issues that will deepen them in such a way as to increase their  effectiveness, primarily for the citizens of the two countries.

He also expressed gratitude for the high appraisal of Russian efforts  in the cessation of hostilities in Nagorno-Karabakh.

"  As you said, it made it possible to stop the war. For the first  time after so many agreements, the ceasefire really works, because  there is a mechanism for monitoring the ceasefire. This is the  consent of Azerbaijan and Armenia to conduct peacekeeping operations  and they are already carrying out their activities, both by ensuring  the cessation of hostilities and by providing humanitarian assistance  to the people of Nagorno- Karabakh. By order of President Putin, an  Inter-Departmental Humanitarian Response Center is being created,  which will help resolve humanitarian issues of the population as soon  as possible. We are actively involving international organizations in  this process, "Lavrov said.

The interlocutors also touched upon other issues on the agenda of the  Armenian-Russian cooperation.