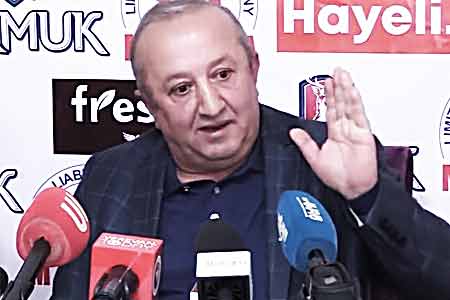 ArmInfo. The Special  Investigation Service of the Republic of Armenia opened a criminal  case on the basis of statements voiced by former  Head of Military  Control Service of the RA Defense Ministry Movses Hakobyan during a  press conference.

In particular, it is reported that in the SIS a criminal case was  initiated on the grounds of part 2, article 308 of the RA Criminal  Code - abuse of office, which, by negligence, entailed grave  consequences.

To recall, a few days earlier, Movses Hakobyan convened a press  conference at which he made resonant accusations against the current  government headed by Nikol Pashinyan, including explaining the reason  for his resignation.

In response to such accusations,  press secretary of the RA Prime  Minister Mane Gevorgyan noted that the statements of the former chief  of the General Staff of the Armed Forces of Armenia Movses Hakobyan  should be taken care of by law enforcement agencies.

"I am authorized to report that Prime Minister of Armenia considers  all the accusations brought against him by Movses Hakobyan as false  and absurd and will consider them accordingly. These statements are  also examined in the context of the alleged betrayal by the Prime  Minister. Based on the results of the investigations, a decision will  be made on this matter, "she wrote.